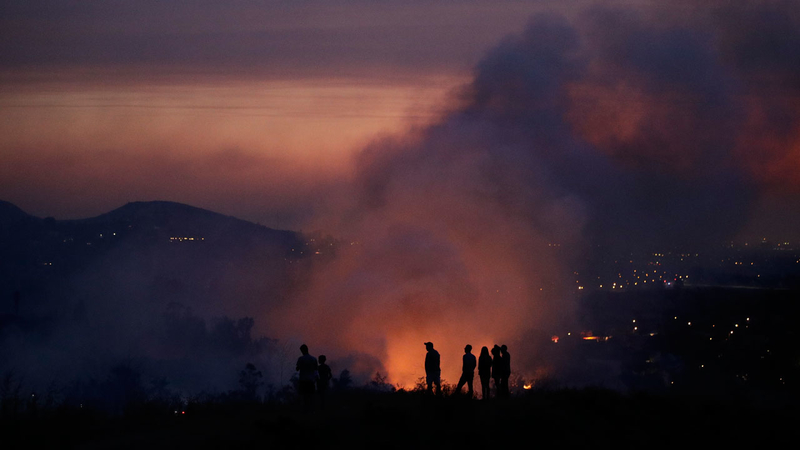 "You have to deal with what life gives you," he says. "But don't want to flood again, it was pretty traumatic."

The well-known University of Houston Political Science Professor methodically walks through his damaged home, in the same manner generations of students would immediately recognize. His mind though, is elsewhere.

"It's either going to burn or not," he said.

Dr. Richard Murray was trying to clean up his flooded home when he learned his second home was being threatened by the California wildfire.

Dr. Murray is referring to his Napa Valley home, which he purchased some 25 years ago. His wife, Debbie Hartman, and her elderly mother were staying there to wait out the flood recovery of Harvey. Then early Monday morning, they were forced to evacuate because of the fast moving wildfires.

"I ran around gathering up mostly my mom's medicine and medical equipment and my neighbors were helpful and we had to caravan out," said Hartman, who owns a small public relations firm in Houston.

Speaking to Eyewitness News via Facetime, Hartman says she is currently staying on a friend's couch in nearby Yountville, and does not know if their Napa house survived.

"There's a lot of conflicting information, we got a text that Circle Oaks (our subdivision) was on fire, then immediately after, (a text that says) the houses are still okay," Hartman said.

As Hartman and her mother wait in California, Dr. Murray is sleeping on his adult son's couch in Houston. The couple has not made long term plans about what to do yet, they are just grateful that everyone is alive.

"We're so much more fortunate than a lot of people, we'll get over this, but many other families' life is pretty destroyed," said the professor.

In all his years of picking out the perfect cabernet for his Specs stores, John Rydman never thought he'd look at the bottles and wonder if there will be another vintage next year.

"It's devastating," Rydman said. "We know so many of these people, and you can't tell exactly where the fires are."
Purveyors like Rydman not only worry about their friends, but also the business ramifications of the flames.

"How are we going to get the wines our customers want? What's the continuity? What's going to happen to this vintage?" he asks.

The hope now is the flames will spare the vines so Napa can rebuild.