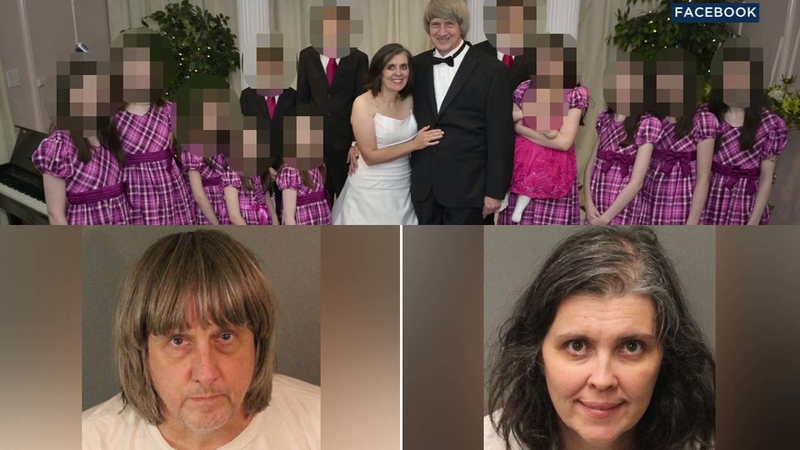 PERRIS, California -- The mother of 13 malnourished adult and juvenile children, some of whom were chained to furniture in a filthy Perris home, was confused by the arrival of Riverside County sheriff's deputies after a 17-year-old escaped and called 911, officials said Tuesday.

"The mother was perplexed as to why we were at that residence," said Greg Fellows, Riverside County Sheriff's Department Perris Station commander.

According to Fellows, there had been no prior law enforcement contact at the Turpin home.

The 17-year-old girl called 911 from a deactivated cellphone after she escaped through a window, Fellows said. The teen showed deputies photos of the conditions in the home that led them to respond to the residence to conduct a welfare check and interview David and Louise Turpin.

At that time, deputies found three of the 12 children still in the residence chained to furniture. David and Louise Turpin were subsequently arrested.

"We do need to acknowledge the courage of that young girl who escaped from that location to get them the help that they so needed," said Fellows.

Fellows said the Turpins have lived in Perris since 2014. All of the children, ranging in age from 2 to 29, were home schooled. They are all the biological children of David and Louise Turpin, Fellows confirmed.

Fellows also said that the family had at one point lived in Murrietta as well as the state of Texas.

Fellows said there was no indication there were other children being schooled at the home.

The grandparents of the children told ABC News that David and Louise were deeply religious and believed God had called on them to have so many kids.

The couple accused of shackling 13 children in a filthy Perris home believed God had called on them to have so many kids, according to family members.

Fellows, however, said he had no information on any religious organization that may have played a role in the parents' motives for the abuse of the children.

According to Fellows, the condition of the chained-up and malnourished children as well as the filthy home were a shock to investigators. "There was a very foul smell inside the residence. It was extremely dirty," said Fellows.

"I would call that torture," said Fellows.

Fellows said investigators did not yet know how long the children had been kept in those conditions.

Investigators didn't have any immediate information to suggest sexual abuse and there was no indication of mental illness in the family, but many questions still remain, Fellows said.

The 13 children, some of whom are adults, were removed from the home and transported to local hospitals for evaluation and treatment.

The adult children are listed in stable condition and are being fed in a safe, secure environment, said Corona Regional Medical Center CEO Mark Uffer. "They're very friendly, they're very cooperative," Uffer said.

Uffer said he'd never seen a case like this in his time as the hospital's CEO.

Meanwhile, the minor children were being treated at another medical facility.

The Medical Director of the Child Abuse and Neglect Unit at Riverside University Health System, Dr. Sophia Grant, said the children will require stabilization and slow feeding due to their extreme malnourishment.

"The long-term needs of these kids are going to be psychological and emotional," said Grant. Grant said the children would likely experience post-traumatic stress from their experiences. The recovery of the children will be "ongoing and long-term," she said.

"I think there's always hope, but you have to imagine that these kids are going to need a lot of support," said Grant.

David and Louise Turpin remain behind bars with bail set at $9 million each. They are expected to be arraigned Thursday on charges of torture and child endangerment.