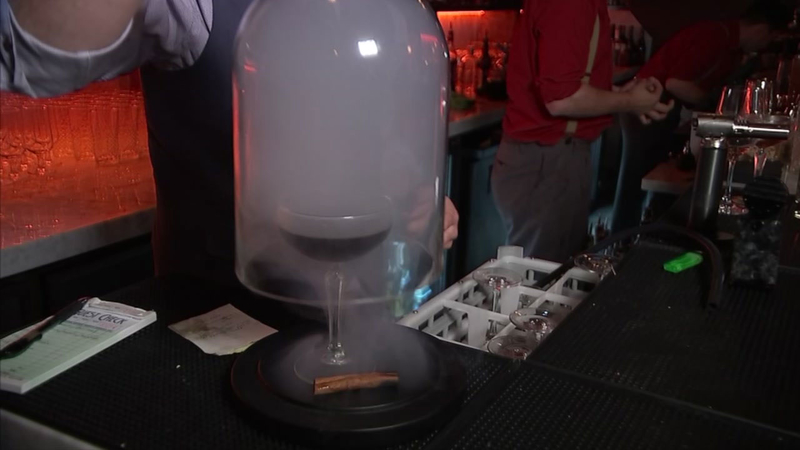 PEARLAND, TX (KTRK) -- There's a new bar opening in Pearland that aims to take you back in time. Grazia Italian Kitchen co-owner Adrian Hembree and his partners have created their own prohibition-era speakeasy with an eye on authenticity.

It's called The Noble Experiment, named for the era it celebrates. The theme is a new take on a once-thriving underground nightlife scene. Speakeasy of the 1920s existed in backrooms and alleyways in every American city at a time when alcohol was illegal.

"America people wanted a chance to get dressed up and go out to a place and enjoy a nice drink," Hembree said, adding, "That was part of my inspiration for this place."

On a recent trip to New York, Hembree visited Please Don't Tell, a bar that replicates the exclusive nightlife environment that thrived during Prohibition.

"It was such a process to get in the place. You had to have a password and jump through all kinds of hoops. But once you got it in, the space was incredible."

"It's all about the show," he said. "You'll need to have the password and dress the part. We want people to want to dress up and be part of the show. There's just something a little secretive and fun about it."

Getting inside Hembree's gin joint requires walking through a faux phone booth with a hidden door. But before you get there, you'll need a password. Hembree says general manager, Larry Bates, is the man to know for patrons who want to, as Hembree says, "speak easy." He says he'll also be posting password hints on Facebook.

"The focus here is really about the drink," Hembree said.

Indeed, the cocktail menu is as dedicated to detail and authenticity as the dcor.

"It's a dark and authentic, a very New York feel. I drove all the way from Houston, and in traffic, to be here. It's just a really great place. The drinks are superb, the most unique I've ever seen," said bar patron Kiki Dikmen.

"When you walk out of The Noble Experiment, reality sets back in. So the goal in there was just to transform a different world that created some incredible excitement and fun," Hembree said.