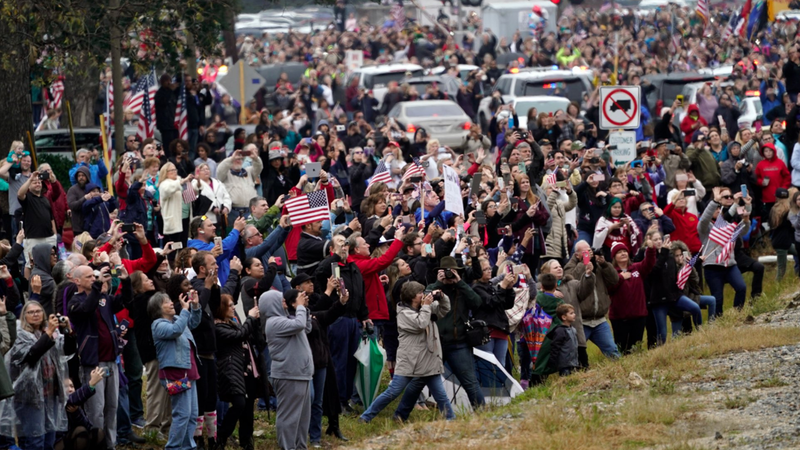 Thousands of Texans gather to say farewell to Pres. Bush

NAVASOTA, Texas (KTRK) -- From Spring to College Station, the route taken by Bush 4141 was lined with neighbors who wanted the chance to say goodbye.

Thousands of people spanning multiple generations witnessed history Thursday as the funeral train carrying Pres. George H.W. Bush made its way to his final resting place at his presidential library on the Texas A&M University campus.

Through tears, cheers and waving American flags, the crowds honored the 41st president as he made his final trip to College Station.

The Honor Guards of both @CCEMSTX and @Springfdtx paid tribute to our 41st president in Old Town Spring today. Here's a quick video. pic.twitter.com/Sm1pnASaK6

In the Spring area, crowds saluted and waved to the Bushes as the train passed by.

You can always count on #Texans to do it right. Look at the crowds who came out to salute and say thanks to #Bush41 #Remembering41 https://t.co/4w6Z0IH9A1 #abc13 pic.twitter.com/uKcuivQYaU

From SkyEye, we watched as crowds swelled in towns like Magnolia and Navasota, the train slowing each time to allow mourners the chance to see the president's casket.

Students of all ages were also present for this historic moment in Texas, as they watched as Bush 4141 traveled over its two-and-a-half hour course.

INCREDIBLE! This is a SkyEye view of the crowd in Tomball as #Bush4141 passes through. #Remembering41

They just had to pay their respects. The #Bush motorcade is scheduled to come by soon. #abc13 https://t.co/dro40LaZo0 pic.twitter.com/byU3A3WOIo

This little boy, 2-year-old Lee Padilla, lifted his little hand in salute to President Bush as his motorcade made its way to Spring for that final train ride.