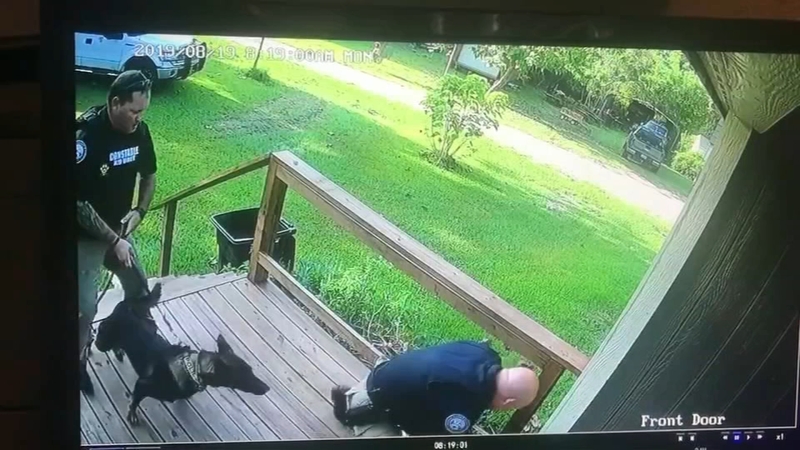 LIBERTY, Texas (KTRK) -- A quick-thinking 47-year-old mother is being credited with keeping a burglary suspect from running. He showed up at her front door while allegedly fleeing from deputies.

It started on CR 6471 in Liberty County when Israel Martinez allegedly broke into a camper trailer around 7 a.m. Monday. A vigilant neighbor heard someone in the camper and called deputies.

Once they arrived, deputies say Martinez took off and ran.

Not long after, Dana Clover says she was awakened after hearing a knock at her door.

"We have no trespassing signs, so I'm always armed. I answered the door with my little pistol and there was a terrified-looking young man on the front porch," said Clover.

She says the man on her porch told her he was being chased by his girlfriend's dad and wanted her to call his grandmother.

"When he sat down on the front porch, I noticed he had gloves hanging out of his back pocket, and not many boyfriends take gloves to sneak in and see their girl," said Clover.

While he waited outside, Clover called the sheriff's office and, sure enough, Martinez fit the description of the burglar they were looking for.

"I had the door shut. I told him, 'I've been calling your grandma, just hang out.' And he laid down on the porch and I got my bigger gun out when I found out he was a bad guy and stood behind the screen door," she said.

Clover says she had her gun pointed in his direction just in case.

"He didn't know the shotgun was on him, thank goodness," she said.

Deputies arrived and Martinez was hauled off to jail. They say while he was running from deputies through the woods toward Clover's home, he dropped several stolen guns. They also recovered a gun they say he had on him at the time. He's charged with burglary and could face more charges.

"(Clover) played it very cool. She's to be commended for the way she handled the situation," said Capt. Ken DeFoor with the Liberty County Sheriff's Office.

"You've got to protect yourself, your family and your neighborhood. We're a community and we need to act like one and pull together, and in this case we did and I'm proud of us all," said Clover.