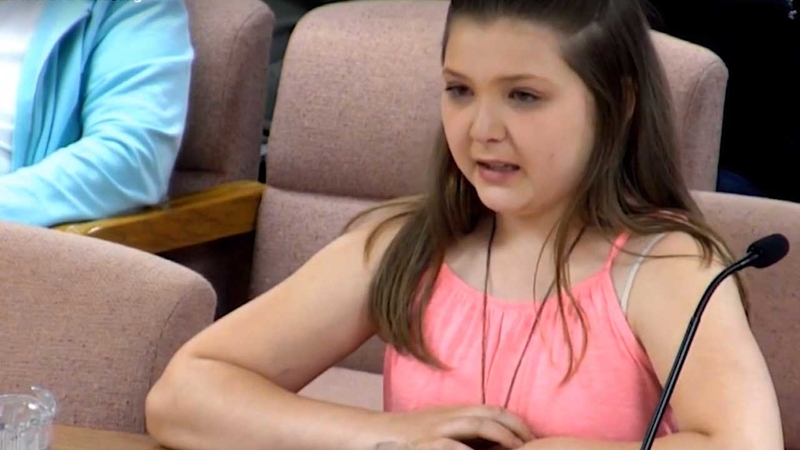 After getting alleged threats from bullies, one New Hampshire fifth-grader decided it was time to speak out to her local school board.

"I have been threatened to get shot in the head with an AK-47 and buried in my backyard, and many other things," Delanie Marcotte said in her emotional plea. "I ask you: What are you going to do to protect me and my classmates against bullying?"

Initially, Delanie's father, Todd, had planned to speak on her behalf to ask the Timberlane School Board to do something about the bullying at his daughter's school in Plaistow, New Hampshire. Delanie asked if she could speak instead, and her father obliged, WCVB reports.

The 11-year-old got a round of applause after her speech.

Delanie's mom, Amy, released a statement saying how proud she was.

"Quite frankly, she is doing something that I would have never had the guts to do, being bullied myself in high school," the statement reads. "We stand by her 100 percent and will do whatever it takes to protect our child."

Todd said that he had a positive conversation with the superintendent after Delanie's speech. The district released a statement saying they take this and all reports of bullying seriously and that a review is underway.

"We will continue to encourage all students to speak up when they see, hear or experience something that makes them uncomfortable," said Dr. Earl Metzler, the School Administrative Unit 55 Superintendent.

Her proud dad said she's going to work to continue spreading her anti-bullying message throughout the summer.

"I do think I helped a lot people out because a lot of people watched that video. There's a lot of views, a lot of shares," she said of her speech. "There's a lot of kids out there who do get bullied. They're not alone anymore, and they should know that."
Report a correction or typo
Related topics:
educationparentingchildrenbullyingschool boardu.s. & worldanti bullying
Copyright © 2022 KTRK-TV. All Rights Reserved.
TOP STORIES
Deputy hit while working accident during Jeep weekend, sheriff says
Alcohol and storms contributed to deadly crash in Asiatown, HPD says
At least 12 displaced after SW Houston apartment fire, HFD says
78,000 pounds of infant formula arrives in US
Man shot on apartment balcony; same apartment shot up earlier: HPD
'It was like a mad dash:' Clear Creek ISD senior set to graduate
Man dead after being shot during road rage incident, HCSO says
Show More
Biden pushes economic, security aims as he ends South Korea visit
Rain clearing, but still more to come this week
The Railroad Killer
Fate of 2,500 Ukrainian POWs from steel plant stirs concern
CDC recommends wearing masks indoors, ahead of Memorial Day weekend
More TOP STORIES News