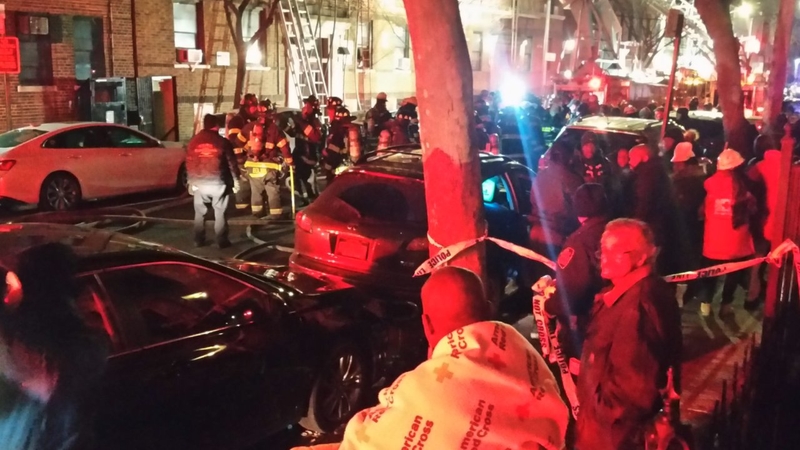 BRONX, New York -- At least 12 people were killed, including at least one baby, in a large apartment building fire in the Bronx on Thursday night.

The 5-alarm fire broke out just before 7 p.m. on Prospect Avenue near East 187 St. on the first floor of the five-story building. The flames quickly spread up to the fifth floor. The building is described as "non-fireproof" and is highly combustible.

The identities of the victims have not yet been released, although Mayor Bill de Blasio said one of the victims is as young as 1 year old. The oldest victim is believed to be over the age of 50. Three of the victims are members of the same family.

There are also several other people seriously injured, four are said to be in critical condition. Two people were rescued from the fire and are expected to survive.

The patients were taken to Jacobi Medical Center and St. Barnabas Hospital.

The fire was brought under control just after 9 p.m. The scene is described as having a very heavy smoke condition. The victims perished on various floors of the building according to fire officials.

The Office of Emergency Management and the MTA are sending buses to the location to accommodate residents that have been evacuated from the building.

The mayor quickly arrived at the scene to receive a briefing on the tragedy.

We are closely monitoring the devastating fire in the Bronx. As always we are thankful for our first responders. Our thoughts are with the victims and their families tonight.

Eyewitness News Reporter Josh Einiger was live on the scene:


Stay with Eyewitness News for the latest on this breaking news story.