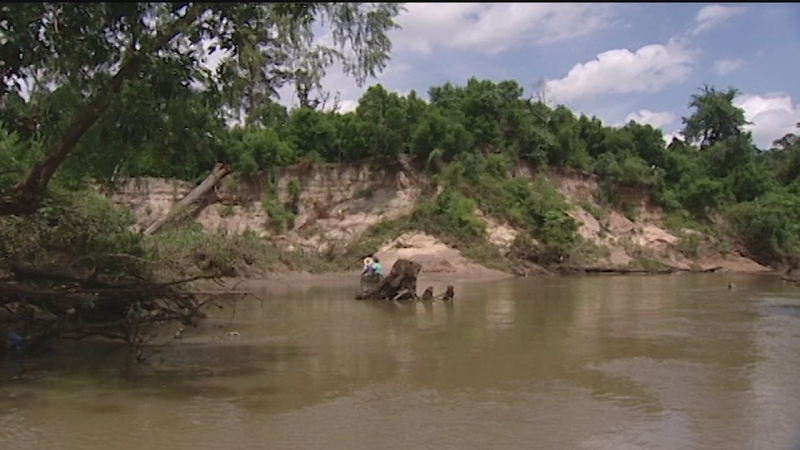 HOUSTON -- Ask my kids about canoeing down a Texas river and they're probably more likely to tell you about Sea World's Rio Loco or a lazy river at the nearly neighborhood pool. The notion of dropping a canoe in under the 610 West Loop bridge for a lazy paddle down Buffalo Bayou is as far from their mind as it was from mine; afterwards my only regret is that I waited 13 years since arriving in Houston to do it.

A few unsure steps down a sandy bank underneath one of the most congested stretches of highway in Texas leads to another world. Egrets glide over the banks, fish jump, rapids run around World War I relics, turtle tracks slide up & down the banks, sandy beaches perfect for picnics emerge around hidden corners.

It's not perfect. There's plenty of trash and it's still a bayou - the smells don't always remind you of an Irish Spring - but I highly recommend a trip if you've never done it.

And if you talk to some activists and naturalist friends of the bayou, you better do it before Flood Control does any work on it. Ask Harris County Flood Control engineers and they promise it will be better than ever as soon as they finish a $6 million 18-month project to control erosion.

The fierce fight over the necessary permits for the project prompted the District's director Mike Talbott to tell Eyewitness News, "I love Buffalo Bayou and if the flood control district was doing half the things they say we are, I would object to the project."

Buffalo Bayou has always been a work in progress for both man and nature. From the time early Houstonians got tired of its swampy banks they've been discussions about how to change it and the bayou itself, like all rivers, is naturally constantly changing and moving.

Decades ago, the federal government was going to concrete the banks through Memorial Park. After than plan was abandoned, this stretch of Buffalo was allowed to maintain its natural state. Sort of.

The stretch of Buffalo Bayou under consideration for what is called The Buffalo Bayou Demonstration Project runs roughly from the West Loop to Shepherd. On one side is River Oaks Country Club and estate-like homes; on the other bank are Memorial Park and the Arboretum. As the Flood Control District's Director Mike Talbott pointed out this is some of the most expensive dirt in all of Texas. Here homeowners have the means to make sure it doesn't erode into the bayou.

From the water you can see the methods homeowners have used to try and keep their expensive property from washing downstream. There are terraced inclines, concrete embankments, wooden planks, rip rap alongside some untouched sections. Some of the improvements work better than others, but both friends and foes of the new plan agree that if not done in concert with one another, the piecemeal erosion control efforts change the waterway in less than ideal ways.

The proposal is called a Demonstration Project, as Talbott explains, because the District wants to showcase what is has determined are some of the best ideas out there. The $6 million cost for the plan is to be evenly split between the Harris County Flood Control District, the City of Houston and River Oaks Country Club. The Country Club's golf course is in danger of losing land currently used by some holes and agreed to fund part of the demonstration instead of doing their own project at the water's edge.

Naturalists like Don Greene, our bayou guide, questions why it needs to be done at all. Telling us while paddling down the bayou recently, "This is the best nature can offer and once it's gone we lose it. People are trying to fix something that's not necessarily broken. Erosion is a natural process. What you do is understand that's what happens, embrace it and work it out in a compromise with nature."

The plan is backed by the Bayou Preservation Association and Terry Hershey. They claim the project would help restore and then preserve a natural state for the bayou. Flood Control's Mike Talbott says it can't wait.

He showed us aerial photographs of the bayou. You can see the twists of bayou move over the decades. It was much slower before the Addicks & Barker reservoirs were built on the west side of Houston. Since then the movement has been more pronounced. Rivers move by eroding the banks on one side. When that happens trees fall, cliffs emerge. One of the most contentious spots in the proposed demonstration area boasts 100 foot sandy cliffs with trees teetering on top.

Greene and a group of activists organized under the 'Save Buffalo Bayou' banner are opposed to the plan and are working hard to keep the Army Corps of Engineers from issuing a permit to allow it to happen. The Corps denied the projects first application last year. Public comments are being accepted on the second through the end of June. You can comment by clicking here.

The Flood Control demonstration project is planned to show state of the art methods to keep erosion at bay. The plan (available here) would straighten some of the bayou's hairpin turns through this area, shaving some bayou twists into a more relaxed bend. Giant root balls from specifically chosen downed trees would be placed into the banks underwater in places to attract sediment and create friction to slow erosion. In the 18 months of planned construction, hundreds of trees would inevitably be lost.

The flood control district promises to replant even more eventually creating a tree covered bayou that hasn't existed in years. Talbott showed us a flood control retention basin planted by the district that they claim went from bare land to established forest in just 6 years.

Opponents however suggest the native "riparian" (river) forest environment that took centuries for nature to grow, can't be replaced without damaging the ecosystem irreparably. Where, they ask, are the turtles and fish and creatures of the forest supposed to relocate during 18 months of construction and years of re-growth? Greene argues, "The damage it would do to wildlife is huge."

Their suggested answer is that they wouldn't come back and it would be lost forever.

Talbot denies that too but understands this is a long fight telling us, "If nothing got built, I could sleep fine. It would be disappointing."
Related topics:
real estatehoustonted oberg investigates
TOP STORIES
No bond granted for suspect in Pct. 5 corporal ambush killing
Bodies found in back seat and trunk of burning vehicle in Liberty Co.
Attorney of man questioned in dad's death wants him to seek help
Houston greenlights plan to help homeless find housing
EPA announces cleanup plans to address Fifth Ward cancer cluster
Investigation underway in pregnant woman shooting
Search underway for suspect in Texas City double shooting
Show More
New Buffalo Speedway bridge opens over Brays Bayou
ABC13 sits down with 3 of 5 Democrats looking to unseat AG Ken Paxton
You could get paid to get your COVID vaccine or booster
Man who sold weapon to Colleyville synagogue standoff suspect charged
C. Baldwin Hotel announces downtown watch party for The Bachelor
More TOP STORIES News