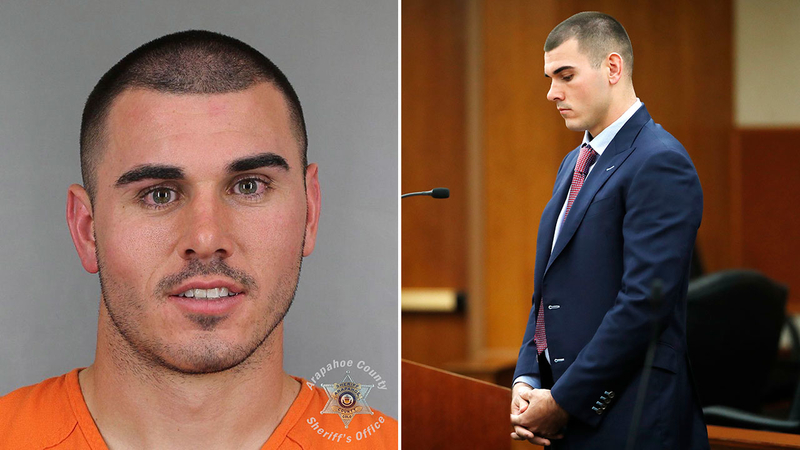 The Broncos waived the second-year pro Wednesday, a day after he was arrested on suspicion of criminal trespass.

General manager John Elway huddled with coach Vance Joseph and team President Joe Ellis and "we agreed that releasing Chad was the right thing to do," Elway said in a statement.

"Even though Chad's no longer part of our team, we've offered to help him however we can and are supportive of him in every possible way," Elway added.

Before a court appearance Wednesday, Kelly drove up to team headquarters in a white SUV and sprinted in and out of the building without stopping to answer questions. He also declined to comment outside court.

He stood silently next to his lawyer, Harvey Steinberg, during his appearance at Arapahoe County District Court, where his next appearance was scheduled for Nov. 8.

Steinberg declined to comment on his way out of the courtroom and again when reached by the AP later Wednesday.

Kelly ignored questions on his way back to his SUV in the parking lot about half an hour before the Broncos announced they were waiving him.

Kelly attended a Halloween costume party hosted by Von Miller on Monday night that has long been a tradition for Broncos players and their significant others.

It was after the party that Kelly found himself in trouble.

According to court records, a couple reported that a stranger entered their home in the Denver suburbs after 1 a.m. Tuesday, sat down on their couch and was "mumbling incoherently." Police say they found the 24-year-old Kelly afterward parked nearby. The man identified Kelly as the intruder and provided surveillance video to police.

Police and court records do not address Kelly's physical state at the time, and there is no mention of testing for alcohol or substance use. Police said officers made the arrest "without incident."

Kelly was released from jail Tuesday on $2,500 bond.

If he gets another chance with another team, Kelly could still face discipline from the NFL, which said Tuesday that it is reviewing the matter.

The Broncos chose Kelly with the final pick of the 2017 NFL draft. Although Kelly brought an attitude that had often crossed the line in college, Elway said fellow Hall of Fame quarterback Jim Kelly personally vouched for his nephew, so Elway signed off on the selection.

Chad Kelly missed his rookie season while recovering from knee and wrist injuries, then beat out former first-round draft pick Paxton Lynch last summer to serve as the backup for starter Case Keenum.

Keenum signed a two-year, $36 million deal in March but is off to a middling start for the Broncos. He has eight touchdown passes and nine interceptions after throwing for 22 TDs with just seven interceptions last season in Minnesota, where he led the Vikings to the NFC championship game.

Just 48 hours before the Broncos waived Kelly, Joseph said he'd be comfortable with Kelly at quarterback should anything happen to Keenum.

Kelly, who earned the nickname "Swag" in college and burnished it with terrific performances in the preseason last summer, ended up playing just one snap for the Broncos, a kneel-down just before halftime against the Rams on Oct. 14 while Keenum was being evaluated for a concussion.

Kelly's spectacular college career at Ole Miss was marked by off-field slip-ups, although he hadn't been in any trouble since the Broncos drafted him.

He was kicked off the Clemson team in 2014 after arguing with coaches during the spring game. He also was arrested after a bar fight in 2014, eventually pleading guilty to a misdemeanor charge of disorderly conduct.

In October 2016, he was involved in a brawl at his brother's high school football game in New York. He ran onto the field after his brother, Casey Kelly, apparently took a late hit and video shows several coaches restraining him on the field.

Although he didn't play in the Senior Bowl after his final season at Ole Miss because of a right knee injury, he was in attendance all week in Mobile, Alabama, so he could talk with NFL teams about his off-field troubles.
Report a correction or typo
Related topics:
coloradoarrestnflathletesu.s. & worlddenver broncos
Copyright © 2021 by The Associated Press. All Rights Reserved.
U.S. & WORLD
1 dead, 3 shot, 9 others injured in Arizona shootings
Here's what will be closed or open for Juneteenth
Fort Hood says safety is top priority: 'We have nothing to hide here'
Biden signs bill to make Juneteenth a federal holiday
TOP STORIES
Biden signs bill to make Juneteenth a federal holiday
New memoir 'On Juneteenth' reflects on life in segregated Conroe
How Texas 'critical race theory' bill could impact teachers
Hurricane Center issues first forecast for Potential Storm Three in Gulf
Boy had scars 'indicative of belt whippings' before death, report says
Man charged in deadly 2011 assault of 85-year-old in Montrose area
How quick crime fighting uses tech to pinpoint shooting suspect
Show More
80-pound cannonball found in Houston could date back to Civil War
Meet Opal Lee, the grandmother of Juneteenth
Here's what will be closed or open for Juneteenth
Woman shot and killed while trying to flee carjackers, police say
MS-13 member gets 50 years in prison after teen found dead in park
More TOP STORIES News