'We recognize that this video has made members of our community upset,' the Bridgewater Township Police Department said.
ABCNews
By Deena Zaru 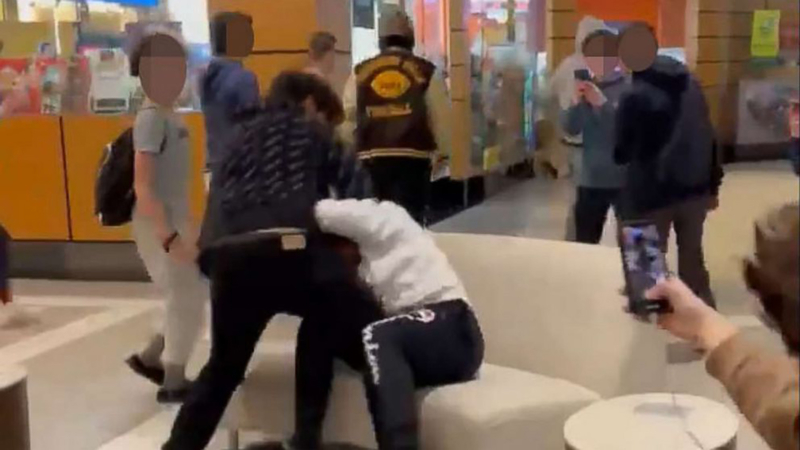 Cops under fire over video of mall arrest

BRIDGEWATER, N.J. -- A viral video of police responding to a fight between two teenagers at the Bridgewater Commons Mall in New Jersey over the weekend has drawn outrage and prompted an internal investigation over the officer's apparent treatment of the Black teenager.

The video, which was taken by a bystander, appears to show the two teens arguing and then they begin to throw punches at each other. Shortly after, two Bridgewater Township police officers arrived at the scene and broke up the altercation. However, only the Black teenager, who was identified as an eighth-grader named Kye, was handcuffed after being thrown to the ground, the video showed.

"They basically tackle me to the ground and then the one - the male officer put his knee in my back and then he starts putting me in cuffs," Kye told ABC News station WABC in New York, in an interview that aired Tuesday night. "And then the female officer came over and put her knee on my upper back too and started helping putting cuffs on me. And while [the other teenager] was just sitting down on the couch watching the whole thing."

In the video, the female officer sits the other teen who exchanged punches on the sofa and then appears to put her knee on Kye's neck as she assists the male officer in handcuffing him.

The other teenager involved in the fight, who has not been identified by ABC News, was not handcuffed.

The Bridgewater Township Police Department told ABC News in a statement that police have asked the Somerset County Prosecutor's Office to assist in an internal investigation of the incident.

"We recognize that this video has made members of our community upset and are calling for an internal affairs investigation," police said, urging anyone with additional videos of the incident to share them with law enforcement.

Troy Fischer, the senior general manager of the Bridgewater Commons Mall, told ABC News that after the fight, both teenagers were "immediately banned from our property for the next three years." He directed further questions about the incident to police.

Kye told WABC that the fight allegedly started after the high schooler picked on Kye's friend, who is a 7th-grader.

"My friend was arguing with the older kid and so I kind of just jumped into a fight, and since he's older, he was on top of me and he's bigger," Kye said. "I was just confused and mad about it."

Kye's mother, Ebone Husain, told WABC that she wants as many people to watch the video as possible.

Amid the outrage, New Jersey Gov. Phil Murphy responded to the incident in a tweet on Tuesday evening.

"Although an investigation is still gathering the facts about this incident, I'm deeply disturbed by what appears to be racially disparate treatment in this video," he wrote. "We're committed to increasing trust between law enforcement and the people they serve."

Moench said that he is "completely confident that the Prosecutor's review will be impartial, objective and thorough" and urged the public not to jump to conclusions before the investigation is complete.