Astros not to blame, says wife of paramedic hit by foul ball 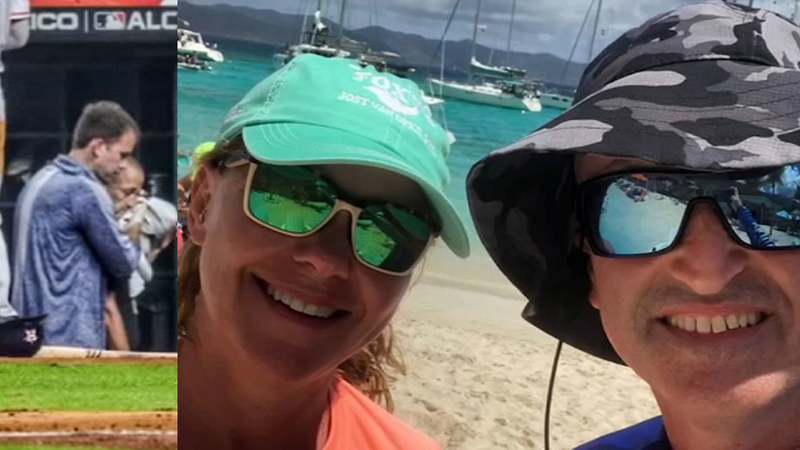 No blame on Astros, says wife of man hit by foul ball

HOUSTON, Texas (KTRK) -- The man who got hit by a foul ball ripped into the Houston Astros dugout during the ALCS game Sunday night has been identified as a Harris County Emergency Corps employee.

Paramedic Brian Cariota was rushed out of Minute Maid Park during a stoppage in play in the fifth inning, in which members of the Astros ball club were shaken by what happened. The foul ball came off the bat of outfielder Michael Brantley.

Cariota's wife spoke to ABC13 on Monday. She wanted everyone to know that he's doing well and her husband would love nothing more than the Astros to win another World Series.

Despite the injuries, she said her husband doesn't blame the Astros.

"He felt like he shouldn't have taken his eye off the ball. He knows it was just one of those freak accidents, and he wants them to win it all. He wants them to take it back," Cori said.

She added that they won't know if there's long-term damage until the swelling goes down around his eye.

She said it's possible that he can be released from the hospital in a couple of days.

This is the second serious head injury someone has suffered at an Astros game this season because of a foul ball. The first incident prompted the Astros to extend netting.

After the Astros touched down in New York Monday, manager A.J. Hinch told reporters that his players were affected by the incident.

"Michael Brantley and I ended up on the field together due to the emotional reaction of just a really scary situation," Hinch said. "That wasn't a baseball time there. There wasn't strategy. It wasn't anything about the game. It was about a human being, caring about human beings, and the moment we all needed to take a break from the game until the gentleman was attended to."

The moment shook the dugout area as the unidentified man was taken away with a towel over his head.