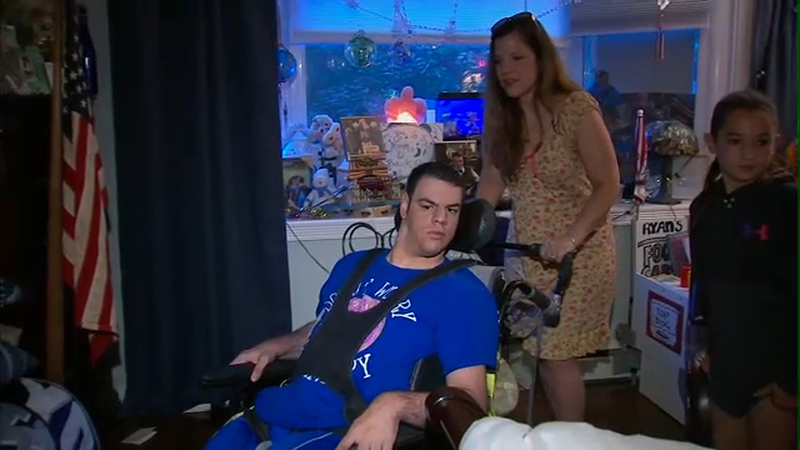 BREWSTER, New York -- In an Eyewitness News exclusive, a 21-year-old with cerebral palsy is pleading for the return of his specially-equipped, handicapped accessible van.

It was stolen from the driveway of his home in New York.

Ryan Gotto and single mom Christy have a daily routine that has become clockwork. "We change Ryan in his bed and then we lift him into his wheelchair," she said.

They spend more than an hour every morning just to start their day. The mother's patience is a testament of their bond.

But as of Thursday their path to the outside world ended, as their Brewster driveway became a dead end.

"It's a real hopeless feeling," said Christy. "It's overwhelming because we rely on our community. We are out and about. And it's scary to think if Ryan had to go to the doctor, he needs to go to therapy tomorrow, we're stuck."

Stuck because Wednesday night someone stole their minivan, and it wasn't just any minivan.

"We need it for everything," said Christy.

So specifically tailored to Ryan's needs, the minivan with modifications cost more than $60,000. It looks like a 2012 white Toyota Sienna, with a ramp for Ryan's wheelchair.

"You wheel in. It secured him. He stays in his chair. He can't go to another chair," said Christy.

It is the kind of thing that could make you lose hope in humanity. And Ryan fully comprehends what was stripped from his life.

But even in this moment, Ryan, a prankster at heart, just wanted to hear a joke.

As for Christy, a lifelong social worker, dedicated caretaker and loving mom, she just wants her minivan back.