CAUGHT ON CAMERA: Brawl breaks out at 99 Cents Only store in Houston 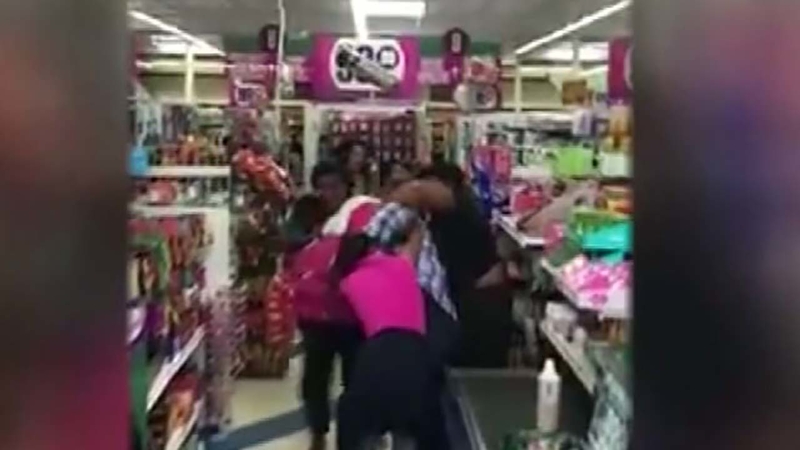 HOUSTON, Texas (KTRK) -- A fight that was caught on camera at the 99 Cents Only Store on the North Freeway is going viral.

In the video, witnesses said two cashiers were fighting in the middle of the store, located in the Northtown Plaza Shopping Center, as customers looked on.

Leonardo Bladeras, who recorded the video, said the company asked him to delete it, even offering to pay him to take it down.

"I'm shopping with my mom and my daughter at the 99 Cents Store, and while I'm waiting, I see two cashiers arguing with each other," Balderas said.

He said the cashier, named Kodi, asked the manager if she could take a break.

Balderas said Kodi went up to the other woman and grabbed her, and they both started swinging away. That's when he started recording on his phone.

Fight on camera at 99 Cent Store in Houston.

"I see this on Facebook on Black Friday sales, maybe at shoe releases," he said.

Balderas said management stood around watching as a customer tried to break them up. The unidentified cashier grabbed a bottle and hit Kodi in the face. That's when another customer with a baby in one arm broke them away from each other.

"Clearly I left the video on so that other store owners can see what goes on when two employees have a dispute. Why not do something about it?" Balderas wanted to know.

Kodi's mother told ABC13 that her daughter is 20 years old, has a learning disability, autism, and schizophrenia. She also said the other woman had been bullying her for some time. She said Kodi told management and nothing was done, so Thursday she fought back.

She walked away with a gash over one eye.

ABC13 made several attempts to get a response from 99 Cents Only Stores, but their reps said they have no comment.

Balderas said the fight was unacceptable.

"They're out there working their butt off. But when there's a dispute and you don't do nothing, that's what happens. So I want that video to be an example to other store owners," he said.

According to Kodi's mother, she has been fired but the other woman is still on the job.