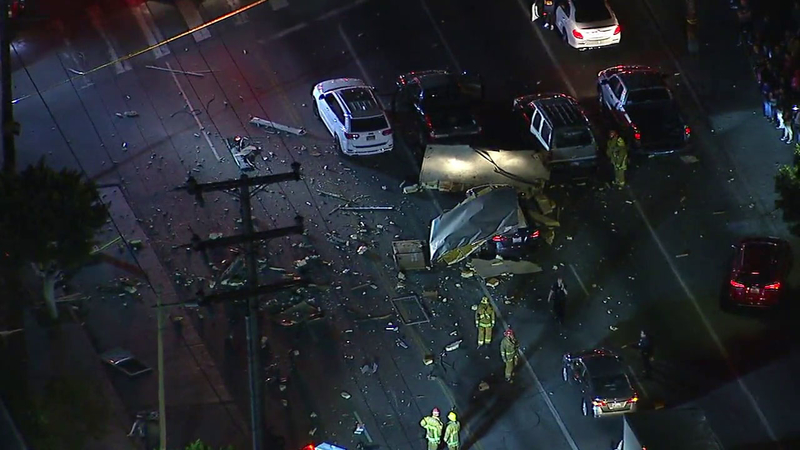 LOS ANGELES, California -- A box truck explosion left a field of debris in the middle of a street Friday night.

The incident was reported shortly before 6 p.m.

"I kind of saw the explosion go across my windshield. A bunch of debris just fell down on the ground and we got out and started looking at the cars next to me, their windows blown out a bit," witness Eric Nelson said.

His truck ended up being hit by debris.

Another witness at the scene captured video of the moment the box truck suddenly exploded.

In the Instagram video, the back of the truck suddenly ignites and bursts, sending debris all over nearby cars and into the street.

A witness captured the moment a box truck suddenly exploded in the middle of a Boyle Heights street on Friday night.

According to Los Angeles Fire Department, the remnants of the truck ended up near a gas station shortly after the explosion happened. Contrary to initial reports, authorities later confirmed that the truck did not crash into the gas station.

"We were just waiting at the light and then the explosion happened and I saw pieces coming down in front of me and just coming down on cars," witness Jovani Gomes said.

Los Angeles police said the explosion was possibly caused by a propane tank being transported inside the vehicle.

The driver and a passenger weren't injured, but were detained for questioning. They were transporting scrap metal and other recyclables.

The gas station was evacuated as a precaution, fire officials said. Investigators believe the explosion was accidental and not linked to terrorism or anything criminal.