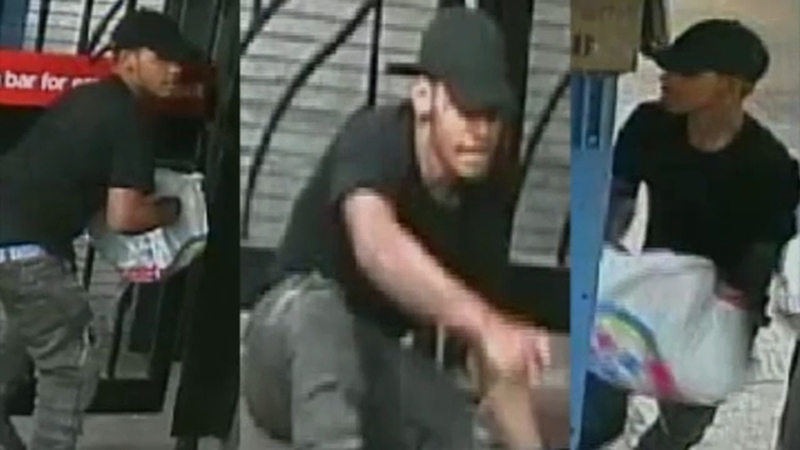 FORDHAM HEIGHTS, Bronx -- An 11-year-old boy was robbed on a subway train in the Bronx by a stranger who struck up a conversation with him, and now police are looking for the suspect.

"I thought to myself, this guy is crazy," said the victim, named Armando, who spoke to KABC-TV about his encounter with the man on a train.

"And he told me, 'Hey I'm gonna be your little buddy today. Your friend for the ride,'" said Armando. "He asked me if I had any money in my pocket and I said no. He asked me are you lying. And I told him why would I lie, I'm scared for my life right now."

That's when he asked for Armando's iPhone.

"Once I took it out he told me to take out the password, take out the iCloud so I guess they wouldn't track it," the boy said. "And I asked can I go now and he said no."

With other passengers just a few steps away, the man held Armando against his will for several stops until Fordham Road, when he snatched the phone and ran.

Armando shouted for help. The man is seen on video stumbling as he ran out of the station with a random witness running after him, but he got away.

Who'd rob an 11-year-old kid? This guy! He must have forgotten that we—the NYPD partnered with a city 8.5 million strong—will not tolerate this kind of behavior. Help us get justice for one of our city’s young people. If you know who this guy is, call CRIMESTOPPERS 800-577-TIPS pic.twitter.com/j293Ndz5QT

Armando wasn't hurt. But for a few minutes on that D train he was paralyzed with fear. Other passengers were all around him, but not one of them knew he was being terrorized before their eyes.

"There was a guy in front of me and I tried to make signals with my face but he just looked at me and looked away and closed his eyes," said Armando. "And I thought to myself people are bad but my mom told me people aren't bad, they just don't want to get into any problems and I guess I need to accept that."

He was heading home to Manhattan from the charter school he attends in the Bronx but doesn't want to go on the train alone anymore, so his mom is accompanying him on his commute for now.
Report a correction or typo
Related topics:
new yorkrobberysubway crimeu.s. & world
Copyright © 2022 WABC-TV. All Rights Reserved.
TOP STORIES
Coast Guard suspends search for Houston woman off Alaska coast
Child left alone starts E. Houston apartment fire
The Railroad Killer
10-month-old girl left in hot car for 'several' hours, HPD says
Known white supremacist threatening armed standoff at Texas Capitol
Katy ISD employee's husband accused of stabbing wife to death
Judge: COVID-19 asylum restrictions must continue on US-Mexico border
Show More
Track your fitness with an app? Doctors wary about certain ones
Your chance of rain is going up this weekend
Harris County Election Day process under fire by Republican Party
Woman stopped at US border with condom-wrapped fentanyl
Parents reminded they're 'rolling the dice' on kids without COVID shot
More TOP STORIES News