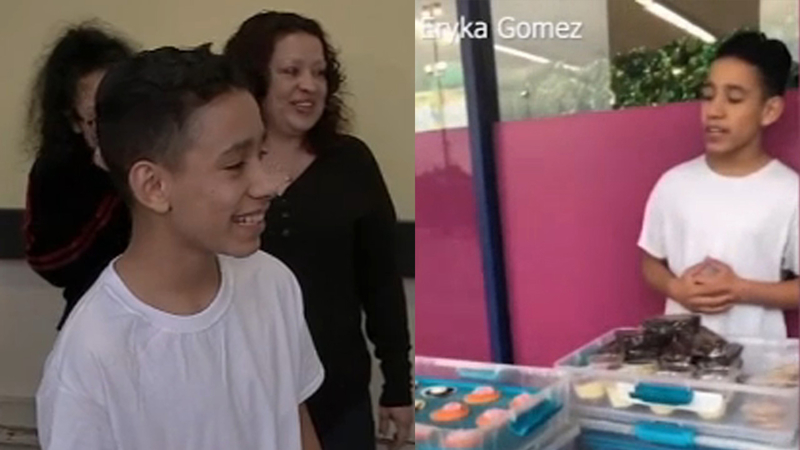 HOUSTON, Texas (KTRK) -- If you live in the East End, you may have seen a 14-year-old boy standing outside selling baked goods.

Though he's been doing this for years, Elijah Cossio has been seeing an increase in sales after a video of him went viral on social media.

"I have strawberry cupcakes, red velvet cupcakes, cherry cheesecakes, fudge brownies and I got chocolate chip cookies," explained Elijah in the video.

The video has been seen thousands of times by people praising his work ethic.

"I just wanted to come and meet Elijah who is an inspiration to kids," said new customer Angela Henderson.

The story behind it all is heartwarming.

Elijah's mom, Tina Hernandez, was injured in a horrific car accident and required several surgeries. Doctors said she was dead for 14 minutes, but was revived. The mother had to learn how to walk all over again.

"She could barely walk, so I had to get out here and start selling," said the boy.
His routine is not that of a typical 14-year-old. Elijah wakes up at 5 a.m. to bake. He goes to school and then sells his treats after.

He's been helping his mother with bills and has dreams of owning his own food truck. He also wants to attend culinary school when he gets older.

"There's more to life than just sitting and playing games," he said. "I was raised to go get and I went and got it."

If you're interested in buying some of Elijah's tasty treats, you can visit him at 7061 Lawndale St.

Additionally, you can make a donation to Elijah's GoFundMe page.

She's making a name for herself by spinning the hits at events that give to charity and promote women.