Bomb threat reported on Houston flight that landed at LAX 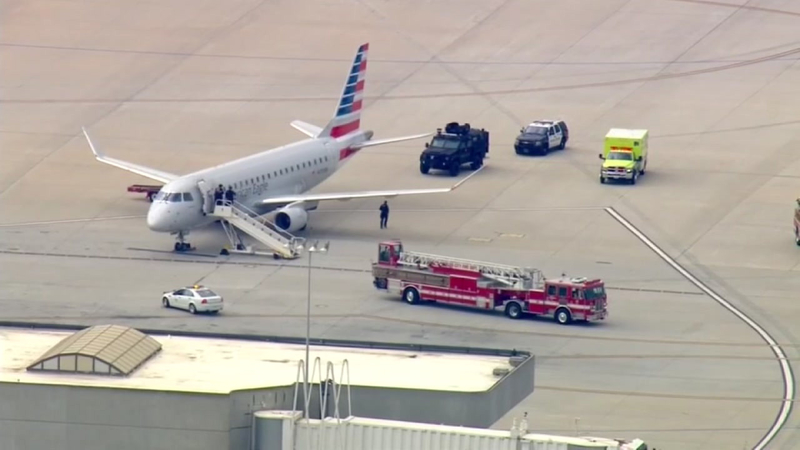 HOUSTON (KTRK) -- American Airlines says officials screened a jet at Los Angeles International Airport as a precaution after a "non-credible" threat was received about the flight from Houston.

Passengers were escorted from the twin-engine regional jet more than an hour after it landed without incident Tuesday morning. A SWAT team with a dog went through the plane, which was kept on a remote stretch of runway. Witness Melissa Perez captured video of firefighters and other airport authorities going through the airplane's cabin.

Passengers were put on buses to be taken to a terminal. American spokeswoman Polly Tracey says the airline hoped to have all passengers on their way after a brief delay.

Airport police Officer Rob Pedregon says the Transportation Security Administration received a threat to the American Eagle flight operated by Compass Airlines. The plane was escorted by F-16 fighter jets for a time, but they returned to their bases after the threat was determined to be not credible.

Also Tuesday morning, officials at the Houston Bush Intercontinental Airport received a threat related to a Delta flight from Houston to Atlanta.

An unspecified threat was called in around 7am to Bush Intercontinental Airport, according to Bill Begley with the Houston Airport System. That threat was for Delta flight #227 to Atlanta.

"Out of an abundance of caution, they removed all passengers and bags off the flight and re-screened everyone," said Begley.

The flight was delayed but safely made it to Atlanta.

Even hoax threats can have serious consequences. Defendants charged under federal statues can spend up to 20 years behind bars and face stiff fines.