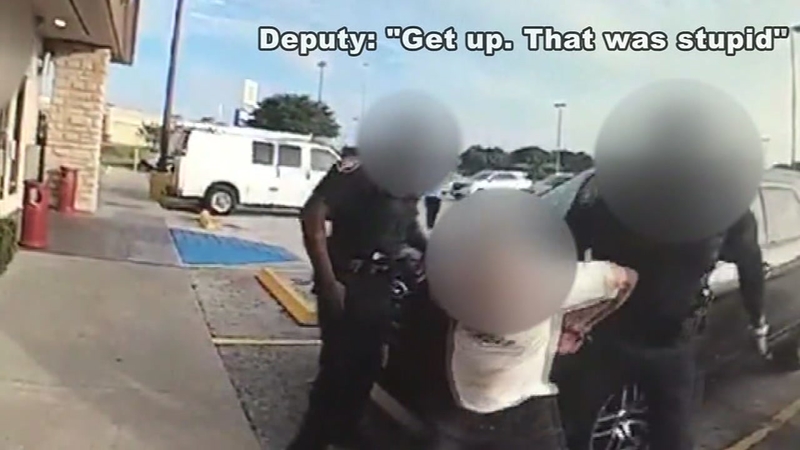 HOUSTON, Texas (KTRK) -- The Harris County District Attorney's Office will determine whether a sheriff's deputy should be charged with a crime for knocking a man to the ground after encouraging the man to slap him.

The deputy involved did not have his body camera on at the time, according to the Harris County Sheriff's Office. ABC13 Eyewitness News obtained video that was recorded on another deputy's body camera.

The incident happened Sept. 30, 2018 outside an IHOP on the Katy Freeway. Deputies were there for a disturbance. One deputy became engaged with a 61-year-old man.

The man's slap is followed by a more forceful one from the deputy that knocks him to the ground.

ABC13 is not identifying the deputy or the man because no one is charged with a crime.

"Get up. That was stupid," the deputy says. "That was (expletive) stupid."

The man was handcuffed, taken to jail and charged with interfering with duties of a public servant. The next day, the charge was dismissed.

A magistrate found no probable cause, according to court records.

"Look at that size difference," said Larry Karson, an associate professor of criminal justice at the University of Houston-Downtown and retired federal agent, as he watched the video.

"He was looking to set him up so he can arrest him, and that's what he did. And, all of that, if not illegal to be determined by the district attorney, is going to be in violation of departmental policy," said Karson. "I'm sure there's a back story but it still doesn't justify the action. He's supposed to be able to handle that."

The deputy has been on active duty ever since and has faced no disciplinary action.

"A thorough investigation into this incident has been conducted by the Internal Affairs Bureau," HCSO spokesman Jason Spencer said in an email. "The findings of that investigation have been forwarded to the District Attorney's Office for review. Once the DA's Office has determined whether criminal charges are warranted, the case will be presented to the sheriff's administrative disciplinary committee to determine whether any policies were violated, and whether disciplinary action is appropriate."

According to department records, the deputy has one use of force letter of reprimand in his 14 years on the job. The reprimand is for not reporting his use of force during an arrest.

"The behavior is egregious and the idea of disciplinary action is to send a message, not only to that deputy but to all deputies in the department, that conduct that is inappropriate will not be allowed," said Karson.