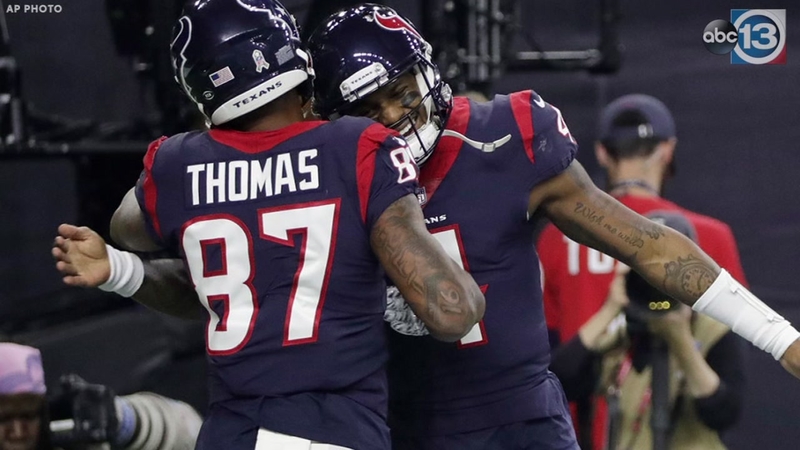 HOUSTON, Texas (KTRK) -- With a solemn backdrop, the Texans made the most of their shot at a record 8th straight win in their Monday Night Football victory over the Tennessee Titans.

Owner Bob McNair, who passed away at 81 last Friday, was on the minds of players in Houston's bid to improve to 8-3.

Celebrate the Texans victory with these freebies

The Titans opened the game with a field goal and the early 3-0 lead. Tennessee gained a big chunk of the drive from a 33-yard pass interference call charged to Justin Reid.

The Texans were unable to respond on the next drive, going three and out without a conversion. Deshaun Watson was sacked on third down for an 11-yard loss.

In the Titans' next possession, Tennessee used a 61-yard catch-and-run by Jonnu Smith on their second play from scrimmage of the drive to extend the lead, 10-0, in the first quarter.

After nearly fumbling the kickoff on the next possession, the Texans stormed back with a 12-yard touchdown pass to Demaryius Thomas, who earned his first score for the franchise. Running back Lamar Miller was the star of the 62-yard drive, running the ball four times for 49 yards.

Houston got the ball back after a big defensive stand. With under 2 minutes to go in the quarter, Deshaun Watson moved the offense into Titans territory, gaining a big chunk of yards off of a 28-yard pass to Deandre Hopkins. Watson capped the drive with a quarterback keeper and touchdown from the 15-yard line. Houston got the lead early in the 2nd quarter, 14-10.

In Tennessee's first possession of the 2nd quarter, the Titans used the "wildcat offense" on an end-around toss-and-run for a 34-yard gain from Corey Davis to the Houston 34-yard line. The Titans, however, failed to convert on fourth down and short from the Houston 3-yard line out of a Texans timeout after a fullback toss and run down the middle.

Right out of the turnover on downs, the Texans needed just one play - a 97-yard scamper by Lamar Miller - to extend the lead, 21-10, with under 10 minutes in the first half. Miller's run was a historic one.

Getting the momentum from the offense, Houston's defense got Tennessee to punt it away on the next drive, capped off by the Texans' first sack of the game, credited to Christian Covington, who also got a second one of Marcus Mariota inside the two-minute warning and a third sack in the second half.

Houston extended the lead before halftime, 24-10. Deshaun Watson aired it out with under 45 seconds in the first half, highlighted by a diving catch to the Titans 30 by Hopkins. Ka'ime Fairbairn kicked it from 43 yards out.

The Texans opened the second half with the ball, marching down to the Tennessee 29-yard line. Houston ate up six minutes of the clock on the drive, capped off by a 47-yard field goal by Fairbairn. Houston extended the lead, 27-10.

The Titans got 7 points back as the 3rd quarter wound down. A 48-yard touchdown pass from Mariota to Davis cut the Houston deficit, 27-17.

In the 4th quarter, Houston extended the lead back to 17 points off of a three-minute drive that resulted in a second touchdown toss between Watson and Thomas. The score all but wrapped up the Texans' record 8th straight win by a score of 34-17.

Houston looks to keep the momentum going and extend the win streak when the Texans host the Cleveland Browns next Sunday at NRG Stadium.

WATCH: Head coach Bill O'Brien says team 'has a lot of faith in each other' after win
EMBED More News Videos

Texans head coach Bill O'Brien shares what made the difference in the matchup with the Titans.

J.J. Watt says the team leaned in on each other to set a new franchise record Tuesday night.

After the Texans' victory over the Titans, QB Deshaun Watson said he knows late owner Bob McNair is still keeping his eye on things.

The Texans have a special way they plan to honor late owner Bob McNair during Monday Night Football.

"He loved the Houston Texans. He loved coming out here to practice. This is his field."