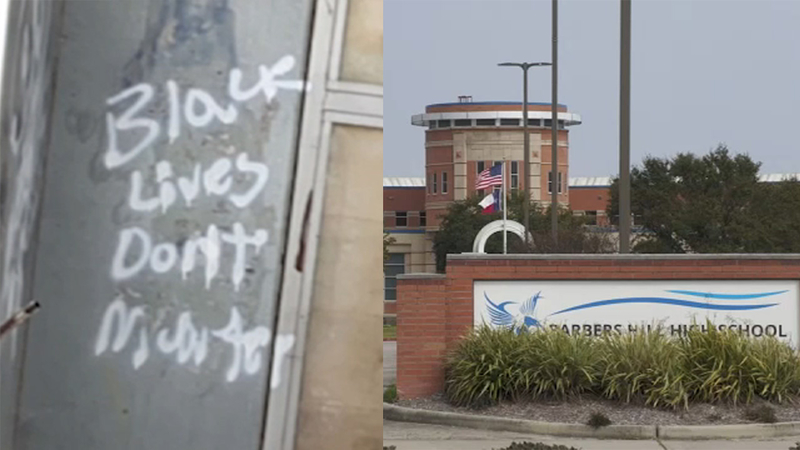 Texas school under fire again over racist message on campus

MONT BELVIEU, Texas (KTRK) -- Some families want answers after graffiti that read "Black Lives Don't Matter" was painted inside a Chambers County high school. A concerned parent who shared the image with ABC13 said the issue is ongoing inside Barbers Hill High School.

The parent, who asked not to be identified given the sensitive nature of this story, said she wants the school district to do more. She said her son texted her the image just days after the election in November.

The parent said in the months to follow, the district changed their face mask policy because some teenagers wore certain ones containing the Confederate flag as a way to harass Black students and show their support for former President Donald Trump. She said the most recent posters of Vice President Kamala Harris and former First Lady Michelle Obama were damaged after being put up for Black History Month.

In an image posted to social media and shared with ABC13, the caption read "I ain't starting no s*** but this is bs like if they can put all this up but we couldn't even wear our damn flag on a mask at the beginning of the year bc it's racist no f*** you you don't like it get out."

"It's disturbing to know how people truly feel and how parents are teaching their children to hate," said the parent. "Just because the shade of the skin is just a little bit darker or a little bit different than them."

Barbers Hill ISD released a statement to Eyewitness News. They said their mask policy has not changed since it was implemented before school began this year and was unaware of the graffiti.

"A disagreement arose amongst Barbers Hill High School Students Friday morning when newly displayed posters were viewed as combative and divisive. The posters in question contained political rhetoric from conventions and speeches from the campaign trail with the emphasis being on those political issues that still divide our county. These posters were removed. Deputy Superintendent Sandra Duree stated, 'We all know how politically polarized our nation is right now and Barbers Hill ISD has and will continue to keep the political discord from interfering with our mission of always providing a safe and conducive learning environment.'"

On Tuesday, school district officials sent a letter to parents that read, in part, "True to form, some media outlets have portrayed these actions as racist, which is 100% false." Officials have, however, declined multiple requests to allow them to speak about this matter on the record.