Bizarre fireworks explosion inside trunk of car caught on camera 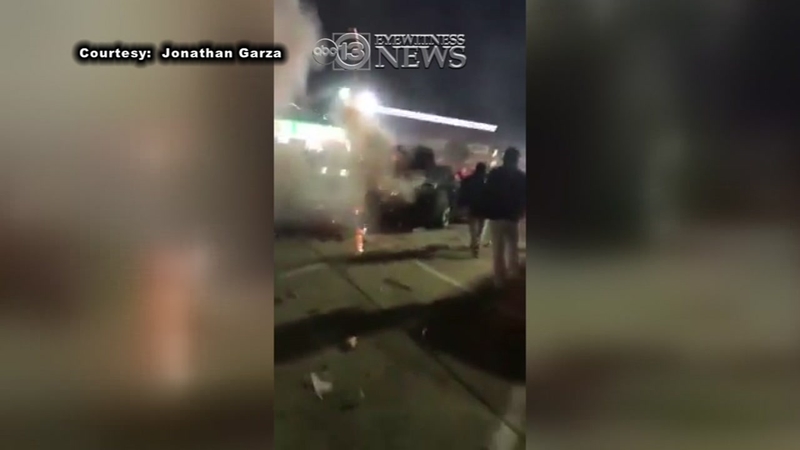 Fireworks go off inside trunk of car

HOUSTON, Texas (KTRK) -- The parking lot of the strip center near Beechnut and Highway 6 began 2018 with reminders of 2017 strewn across the asphalt. Countless cardboard containers, most of them charred beyond recognition are evidence of a huge fireworks party that left a mess for the strip center and incredible damage to one man's car.

An errant firework landed in the trunk Hurara Hassan's Dodge Charger and ignited 600 more he had purchased but not yet lit.

Video of the resulting fire has millions of views on social media.

Hassan is glad nobody was hurt.

"I was scared because my girl was in the car," he told Eyewitness News. "I ran to go see, but luckily she ran out."

Hassan still has video of the firework-laden trunk before the celebration. He also has the aftermath of a ruined trunk that will need serious repair.

Hassan's friend, Essa Sham, was there too. His car suffered minor paint damage.

He has an incredibly upbeat attitude about the damage. So does Hassan.

Witnesses to the surreal scene crowded around to shoot video on their phones. Among them was Jonathan Garza.

"You can tell there was chaos here. It's obvious," he said, standing amidst the debris from the previous night's outdoor party. "The Charger, like the trunk, was popping fireworks left and right."

Hassan said his car is repairable. He also said he plans on celebrating with fireworks next in 2019, with one small exception.

"I'll go do the fireworks again," he said. "But I'll make sure the trunk is closed next time."