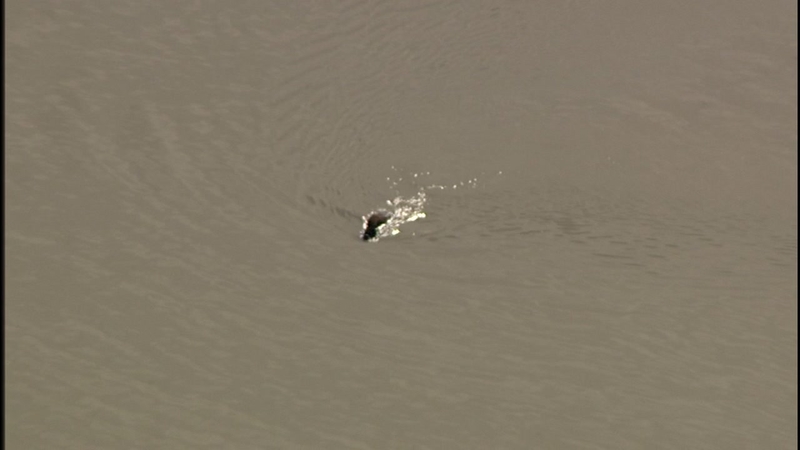 HOUSTON (KTRK) -- It was another image of an animal struggling to escape flood waters Thursday afternoon and it was hard to watch.

A dark spot in the water that covered Bear Creek Park was a bison.

SkyEye 13 hovered for several minutes and moved on. What wasn't captured from the air was a group of workers for Harris County Precinct 3 Comissioner Steve Radack, staging a rescue mission to rescue Buffy the bison.

SkyEye was over a bison roaming around Bear Creek Park Thursday looking for higher ground.

"It had never been done before," said Activities Director Mike McMahon. "The team was incredibly confident when they went in. They had a plan and executed it. I had my doubts, but they were right."

The workers roped the bison, who was the last offspring of two buffalo brought to the park's zoo area 30 years ago. Buffy, it's said, proved to be the friendliest.

"They roped her by the horns, and then slowly towed her more than a mile by airboat," McMahon explained. "We had to be careful not to get her caught in submerged fencing, and we didn't." The water in the park is more than 15 feet deep in places from the floodwater that isn't expected to crest until this weekend.

Buffy was exhausted after the ordeal of being in water for several days. Smaller animals, such as donkeys, goats, birds, and a pig were evacuated earlier. Bison are known to be good swimmers, but that was put to the test.

Buffy was under a vet care, unable to stand. In a phrase, "She's worn out," said McMahon. The vet said she was in better condition than might be expected. "Her temperature is going down, her heart rate as well, her breathing has improved and she's more comfortable," she said. Her prognosis is "good to guarded."

The other denizens of the park zoo are faring better. At the road camp, parrots were talking, and an emu was dry after swimming itself for a time.

Some of the tropical birds rode atop the heads and shoulders of their county caretakers, making the trip in an air boat. "It was amazing," said Will Edwards, to whom a bird named Precious is bonded. "We did it! I'm glad we got everyone now."

The one casualty was a 30-year-old great horned owl. It didn't drown, but the stress of the flood is thought to have led to its death. It had existing health problems.

McMahon left late this afternoon for Texas A&M. Buffy was transported there to receive specialized care that will help her stand up and start the recovery process.

Referring to the animals, big and small at the park, McMahon said, with emotion in his voice, "we've been doing this for 30 years and they're as close to pets and family as they come."