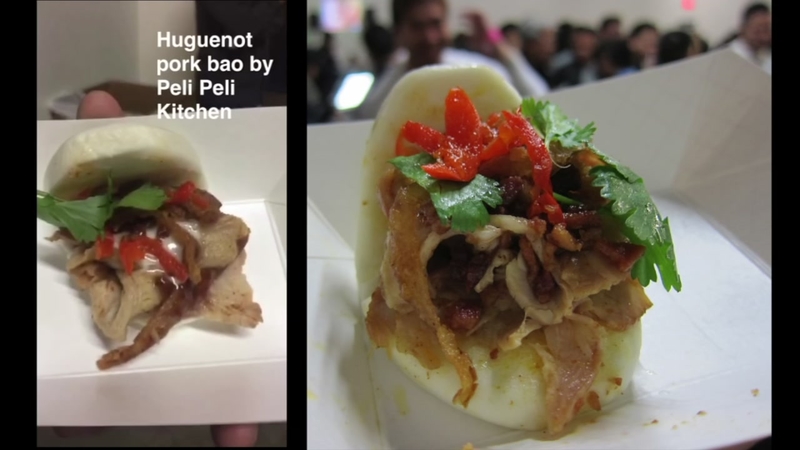 HOUSTON -- More than 300 people turned out Wednesday night to attend the sold out First Annual Big Bao Battle. The event was held at Ralph Smith Studios in Gulfton and hosted by OCA Greater Houston, a non-profit which promotes cultural awareness among Asian Americans and Pacific Islanders. The charity throw down featured 10 Houston area chefs and their creative takes on the popular Chinese snack food known as the gua bao.

"Traditionally, gua bao in Chinese is eaten with braised pork belly," explains OCA representative Kuan Zhao, who was working behind the scenes to steam the bao buns for the chefs to use in the competition. "For (the) chefs, we are asking each to make a unique version of their own bao."

And how unique they were. Attendees feasted on everything from Southern-inspired to Thai-inspired, to Mexican- and Chinese-inspired bao creations, to the tune of 3,000 baos by the night's end.

Jason Hill, of Luv Me Tenders in the Heights, took his chicken tender and tossed in spicy red kung pao sauce to create what he called the Kung Pao Chicken Bao.

Will Gilchriest, of LowBrow Houston, did a Southern comfort food take on the bao with smoked beef tenderloin bao topped with braised mustard greens and crispy shallots.

Rishi Singh of Batanga made one of my favorite baos of the night by melding Spanish and Mexican flavors. Titled Bao de Barbacoa, he made it with a generous smear of Spanish-style saffron and white bean puree, braised beef barbacoa, taqueria-style salsa roja (red salsa) and green onions.

Will Ducante, of SaltAir Seafood Kitchen, looked to his Filipino roots to craft what he called the 'lil Bao Wow, inspired by the Filipino dish kare kare. Hearty and pungent, it consisted of braised oxtail, roasted eggplant and bok choy drizzled with peanut sauce.

In between feasting on baos, attendees sipped on VSOP cocktails by Martell, taro milk tea boba drinks by OCA volunteers, beer by Karbach and satisfied their sweets cravings with mini Swedish butter cake and triple chocolate cupcakes by Jody Stevens of JodyCakes.

The final winners of the night were Paul Friedman of Peli Peli Kitchen with a People's Choice win for their South African pork belly Huguenot Bao. Tony Nguyen and Man Dao of Wokker Tx Ranger food truck were awarded First Place by the judges for their Holy Mole Bao, a barbecue-meets-Mexican bao made of smoked pork shoulder and the chef's own scratch-made mole.

OCA - Greater Houston is a 501(c)3 non-profit, non-partisan organization whose objectives are to advance community building, to promote civic engagement and to foster cultural heritage of AAPI (Asian American and Pacific Islanders) through a diverse sets of community programs.