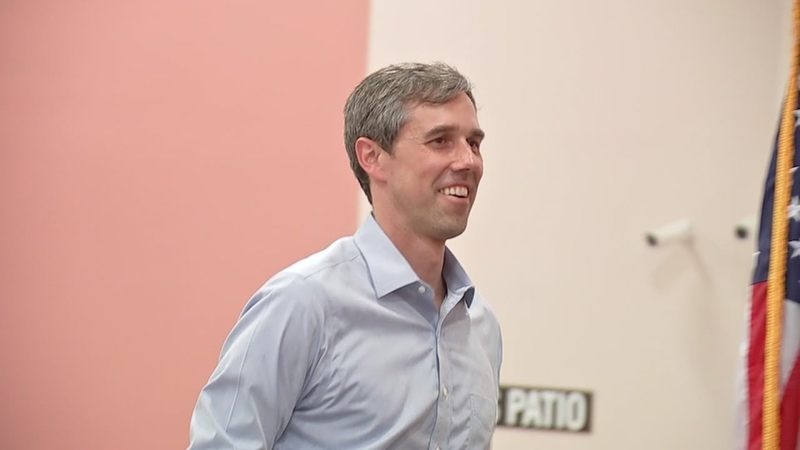 HOUSTON, Texas (KTRK) -- The Houston area again takes center stage in the race for one of the state's senate seats. Democrat nominee Beto O'Rourke is in Victoria and Katy Thursday and in Houston on Friday.

The stops are part of the candidate's 34-day campaign blitz ahead of the November election.

The El Paso congressman appears to have momentum. He raised more than $10 million in the last fundraising quarter and recent polling has him gaining ground on incumbent Sen. Ted Cruz.

"This campaign is not about a political party," he told Eyewitness News after a rally in Goliad. "It's not about even a candidate. It's about people and the energy, and the excitement that I feel here in Goliad and that we saw last night in Corpus Christi, is people seeing their family members and neighbors and folks who they thought came to different conclusions on the issues they cared about but coming together at this moment right now for our country."

O'Rourke, virtually unknown outside of west Texas when he began his campaign to unseat incumbent Cruz 18 months ago, has built a formidable machine.

Though he travels the state in a Toyota Tundra, which he often drives himself, two recent polls put him within striking distance of Cruz. He said the momentum is palpable.

"There are a lot of great people that are coming out right now for Texas and for this country," he said. "And I couldn't be any more grateful than I am for my ability to work with them and campaign with them and serve them in the United States Senate. This campaign is about the people of Texas standing up and providing the leadership that this country that this country needs at this critical moment."

O'Rourke's visit to Houston follows that of incumbent Senator Cruz on Tuesday. Cruz will be back in Brenham and Cypress on Sunday.