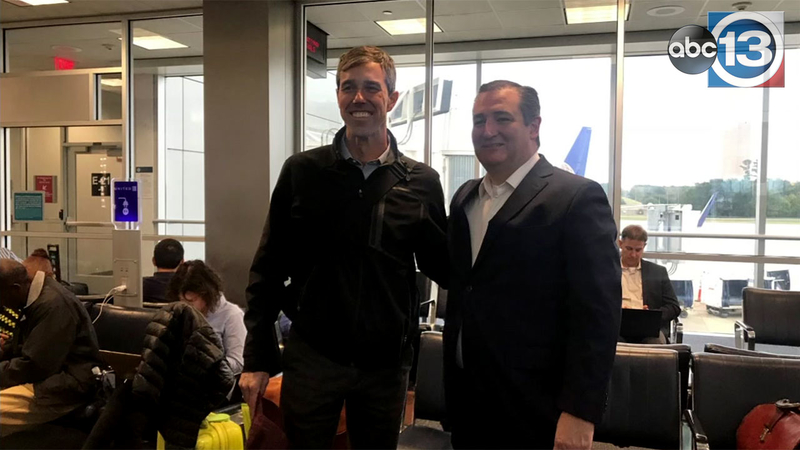 Cruz and O'Rourke go viral for post-election pic together

HOUSTON, Texas (KTRK) -- U.S. Rep. Beto O'Rourke and Sen. Ted Cruz were rivals in one of the most contested races this election cycle.

The race got heated during debates and in attack ads. But now that it is over, it seems like unity is the theme.

A photo on Twitter shows both O'Rourke and Cruz posing with a group of people at Bush Intercontinental Airport in Houston.

Tiffany Easter says she was in Houston about to board a flight to Washington D.C. when she noticed Cruz and O'Rourke were on the same flight.

She says O'Rourke noticed Cruz sitting down and walked over to congratulate him on his re-election.

She also managed to grab a pre-flight photo with them.

"The Texas Senate race was one of the most contested and most watched in the nation," Easter wrote on Facebook. "Today we literally watched them come together. This is America. This is good. This is wholesome. This is why I love and do what I do..."

@BetoORourke & @tedcruz, thank you for showing us the best of America today @ IAH. Thanks for the conversion, courage, humility, and inspiration. Post-election doesn’t mean the conversation and civic engagement stops—in fact, it means the opposite. Thanks for your public service! pic.twitter.com/uVepvKQrW8