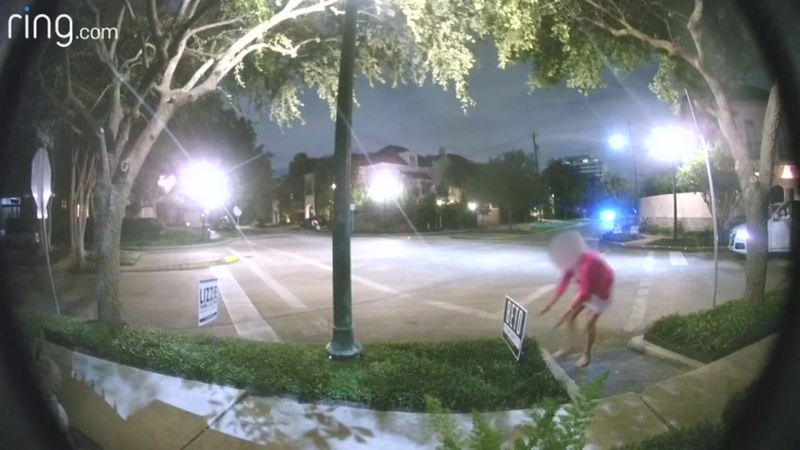 HOUSTON, Texas (KTRK) -- With 53 days before Texans vote in the high-stakes U.S. Senate race between Beto O'Rourke and incumbent Ted Cruz, a piece of surveillance video is making the rounds apparently showing people tampering with a campaign sign for the former.

According to a homeowner in the Glendower Court neighborhood, which is located between River Oaks and Montrose areas of Houston, it has happened twice: once by a man and another time by a woman.

The resident, who wished not to be identified for this story, expressed anger and disbelief about the tampering.

"Why is this individual trying to destroy a political sign in this country?" asked the homeowner. "And what would his neighbors, children or grandchildren think if they saw him on camera doing this? It just isn't the way things are and I don't care who you support."

In the first incident, a man walking his dog pauses in front of the man's home before reaching down and grabbing a Beto sign posted right next to the front gate.

The second incident, though, is grabbing a lot of attention. A well-dressed woman in a white Audi pulls up to a stop sign and then starts running over to a Beto sign posted in the easement in front of the man's house.

"I kept thinking, 'My gosh, what would her children or grandchildren say?' That's not the way we operate in this country," he said.
While the apparent didn't technically take place on the man's property, he is still upset over it.

Meanwhile, the video featuring the woman has gotten some interesting takes from people online who have seen it. Some claim the woman looks like Heidi Cruz, the wife of the U.S. Senator.

While Cruz's camp admits to having a laugh over the accusation, Cruz spokeswoman Emily Miller said about the video, "That isn't Heidi, she doesn't look like her. The Cruzes don't have a white car. Plus, Heidi doesn't have the market cornered on wearing a pink cardigan in Houston.

Cruz's office added it received complaints about Ted Cruz signs being tampered with on private property.

The homeowner we spoke with reported the incident involving the dog walker to the Harris County Precinct One Constable's Office.