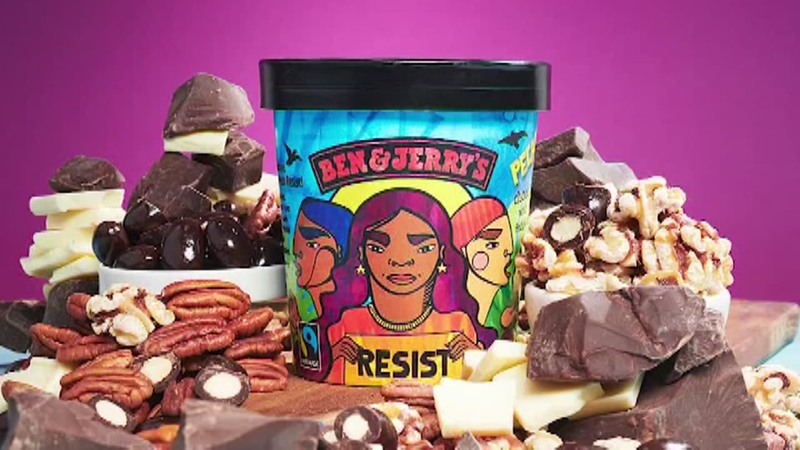 MONTPELIER, Vermont -- Ice cream maker Ben & Jerry's is taking a stand against what it calls the Trump administration's regressive policies by rebranding one of its flavors Pecan Resist.

The company and its founders unveiled the limited batch ice cream flavor Pecan Resist Tuesday in Washington ahead of the midterm elections.

As part of the campaign, Ben & Jerry's is giving $25,000 each to four activist entities: Color of Change, Honor the Earth, Women's March and multi-media platform Neta.

The company said "it cannot be silent in the face of policies that attack and attempt to roll back decades of progress on racial and gender equity, climate change, LGBTQ rights, and refugee and immigrant rights."

Founded in Vermont in 1978 but currently owned by English consumer goods conglomerate Unilever, Ben & Jerry's has not shied away from social causes. While many businesses tread lightly in politics for fear of alienating customers, the ice cream maker has taken the opposite approach.

"All of our employees here and around the world, all of the people we serve, are not only hoping, they are expecting us to speak up as businesses," said Ben & Jerry's CEO Matthew McCarthy.

In 2016, the company's founders, Ben Cohen and Jerry Greenfield, were among a group of activists who were arrested while protesting for campaign finance reform at the U.S. Capitol in Washington.

Ben & Jerry's has previously launched ice cream flavors in support of social and political change. In 2015, Save Our Swirled debuted to bring awareness to climate change. That same year, the company changed the name of its Chocolate Chip Cookie Dough ice cream to I Dough, I Dough in celebration of the Supreme Court's decision to strike down states' ban on same-sex marriage.