Actress Bella Thorne opens up about her past, being pansexual 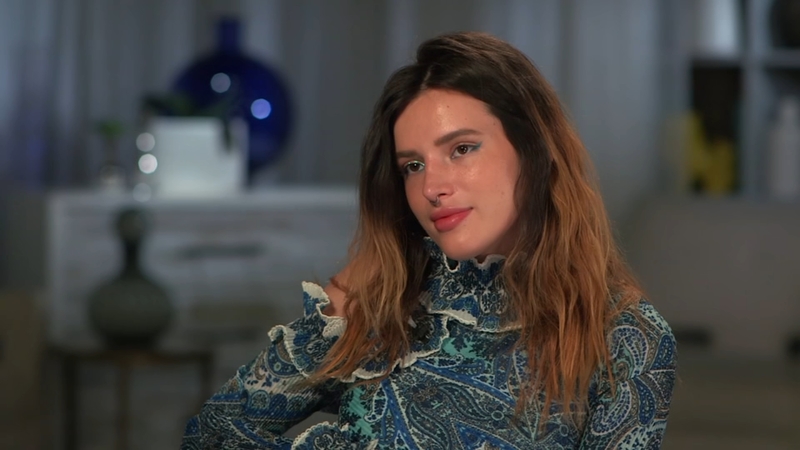 Actress Bella Thorne opens up about her past, being pansexual

Bella Thorne, the 21-year-old actress and singer who recently posted a series of intimate photos on Twitter, says she did it to fight back against a hacker's threats.

It was most recent incident in a difficult year for Thorne.

At 13, she danced her way to stardom as Cece Jones on Disney Channel's hit "Shake It Up."

But Thorne has long since shaken off those teenage dance shoes becoming a darker, more gritty 21-year old rebel.

Now, Thorne has shared intimate details about her troubled past in her new book, "Life of a Wannabe Mogul: Mental Disarray."

Through poetry, she offers a raw and candid look at her struggle for self-acceptance, enduring sexual abuse, and bullying for her dyslexia.

ABC News' Juju Chang asked how does someone who is dyslexic become a wide-ranging author.

"That's kind of what the series is about. How all these things that I really couldn't do, and I did it somehow, and like, you know, I couldn't read and I learned how to read from reading scripts," Thorne said.

Along with the best-selling books, TV shows and movies, 20-million people follow her every move on Instagram; her feed is full of racy images.

Chang asked, "If you were to try to make sense of your feed - the ones where you get a lot of likes are the ones that are very sexualized. How do you feel about that?"

"Do you feel pressure to put out a certain image of yourself?" Chang asked.

"100%. Yeah, I think as we all do. Instagram is our worst mask of ourselves," Thorne said.

"I literally refer to Bella Thorne as this persona who's like this redhead like 'ooo I'm Bella Thorne, I'm crazy! And ah, I'm a wild child, and whatever,'" Thorne replied.

"And yet, what's the real Bella Thorne?" Chang asked.

"She's me. She's that girl in that book," Thorne said.

"She's in a lot of pain, this girl in this book," Chang said.

Thorne said the abuse started when she was just 6 years old; it was unrelenting through until adolescence.

"How did the young you perceive what was happening?" Chang asked Thorne.

"Definitely Stockholm syndrome. I mean, when you're raised with someone and you don't know that it's wrong, it's just very, like, an everyday occurrence, like no big deal," Thorne said.

In the past, Thorne has used Twitter to casually come out as bisexual, but she has expanded her sexual orientation.

"I'm actually a pansexual, and I didn't know that," Thorne said.

Chang asked Thorne to explain what that means.

She then asked Thorne, "What do you want to focus on moving forward?"

"I'm doing a lot of writing and directing, and that's a huge - that's definitely when I feel most happy," Thorne said. "So I feel I have to go more towards that cause I like being happy."