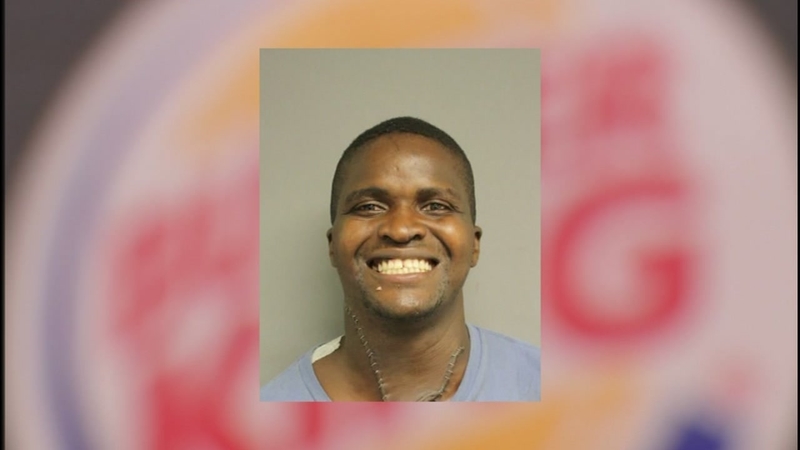 BAYTOWN, TX (KTRK) -- Exactly one week ago, Lee Marvin Blue, Jr., was shot by a Baytown pastor, during what investigators say was a church burglary. His injuries were so serious that he has a scar around his neck with surgical staples.

That's why it's surprising that early Monday morning, Blue was arrested again on a new charge --breaking into a Burger King restaurant on Scott St.

According to police, an alarm alerted them to the break-in around 4am. Inside, a report states, officers found Blue, who told them he had gone inside to use the bathroom. He's also accused of going into the freezer, and taking hamburger patties. Police say he was cooking them when they arrived.

Because of his medical condition, he was taken to the Harris County jail, which has a medical ward. Blue was in court Tuesday on the new allegations against him. His new mug shot shows Blue smiling, with a bandage visible on his shoulder and a large scar from his very recent surgery.

Pastor Benny Holmes of the Church of New Beginnings in Baytown was surprised at Blue's smile. A week before he had prayed over him, after shooting him in the hallway of his church. Holmes said he found Blue upstairs, carrying a box with four computers in it. The bullet hit Blue in the shoulder, damaging an artery.

Holmes says he prayed over Blue, who repeated the prayer of salvation with him. But the pastor isn't surprised Blue is accused of another crime.

"If you're a thief, you're gonna get caught," he said. "To me, God was speaking to Mr. Blue -- I've given you a second chance, you're not promised a third, fourth, or fifth."

Holmes says he may consider visiting Blue in jail, to tell him that in person.