'She was shot in the leg almost to the bone': Baytown man accused of shooting neighbor's dog 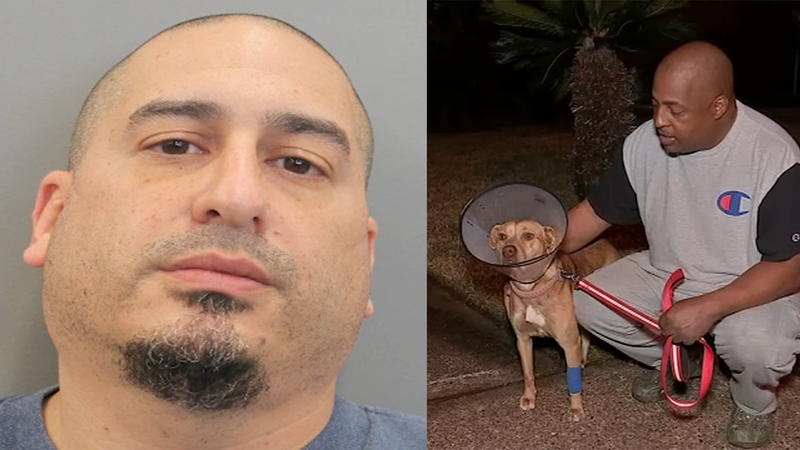 BAYTOWN, Texas (KTRK) -- A Baytown man is behind bars after being charged in connection with shooting his neighbor's dog.

Evan Ceron is charged with disorderly conduct for allegedly or reportedly firing a pistol at a dog named Bella.


"The bullets could have come into our house and our TV room downstairs. Could have shot us in our house. My kids could have been shot," said Larry Martin, Bella's owner.

Bella was injured in the leg by a bullet that ultimately took out a chunk of flesh.

"She ran up to me. She was just bleeding everywhere," said Martin. "She was shot in the leg almost to the bone."

Martin believes Ceron was trying to kill his dog. But this is not the first time this has happened. In fact, court records show this is Ceron's second arrest in three months.

In December of 2021, he was charged for breaking into Martin's backyard by tearing down the fence. Investigators said he was wielding a homemade spear.
"He had a 6-foot pole with a 6-inch knife taped to the end while my dog was chained up trying to stab her," said Martin, who explained he began putting Bella on a chain to keep her away from the fence line he shares with Ceron.


Martin also said Ceron made comments that he wanted to kill the dog because she was barking.

Fortunately, Bella was not hurt during the December aggression.

Martin said family members who were home at the time witnessed the trespassing and called the Harris County Sheriff's Office.