As of Tuesday night, about 640 acres had burned in the Rolling Pines Fire. Only 150 acres were scheduled in the prescribed burn.
KTRK
By Brhe Berry 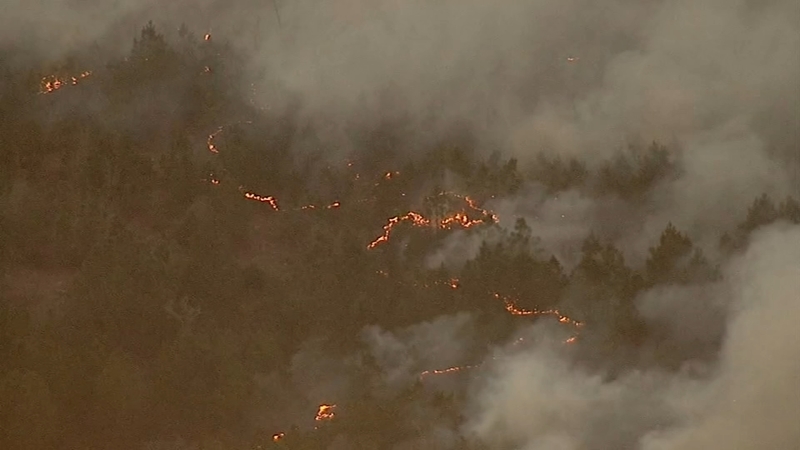 BASTROP, Texas (KTRK) -- A fire crew from the Houston area is heading to central Texas to help beat back wildfires.

The Cy-Fair Fire Department will play a very important role in the fight against the Rolling Pines Fire in Bastrop.

The firefighters are stationed just behind the fire line, close to crews, so they'll be able to provide high-level care within minutes to any injury or illness.

More than 250 families in Bastrop have been evacuated from their homes, unsure when they'll be able to return or if they'll even have a home to return to.

The rolling pines fire started from a prescribed burn.

The fire started in Bastrop State Park as wind gusts of up to 20 mph spread the flames.

Bastrop County Judge Paul Pape - the county's top elected official - said in a news conference Tuesday night that about 640 acres have burned. About 150 acres were scheduled to be burned.

Now, all families can do is sit and wait.

"We couldn't get nothing out. Like, 'You have to leave now,'" one resident recalled.

"Later on he said, 'I'll come back and tell you if you have to evacuate.' And they did that. So we packed up our stuff and left," another resident said.

Overnight reports showed the fire's intensity has reduced, but it's still far from contained.

No injuries or deaths have been reported.

Carter Smith, executive director of Texas Parks and Wildlife, said during a news conference that the prescribed fire began at 10:30 a.m. Shortly after noon, the team noticed "spotting" outside the perimeter of the planned burn, which they believe could have been from embers blown outside the boundaries of the planned fire.

According to the National Park Service, a prescribed fire is a planned fire used for resource benefits or research. The conditions taken into account include the safety of the public and fire staff, weather and the likelihood that the desired outcome will be obtained.

As of Tuesday morning, Smith said, Bastrop County was under weather conditions considered OK for a prescribed burn.

"Our team felt that it was safe to proceed," Smith said.

"Based on everything they knew this morning, it was an appropriate day to burn," Pape said. "None of us can predict the weather more than 15 minutes ahead of time."

Neighboring Travis County, where Austin is, had banned fires Tuesday. Bastrop County had not.

A 2011 wildfire destroyed 1,600 homes in Bastrop, about 30 miles southeast of Austin. The blaze scorched more than 50 square miles, including 96% of the state park.