BBQ BATTLE: Whose is better, Houston or Kansas City? 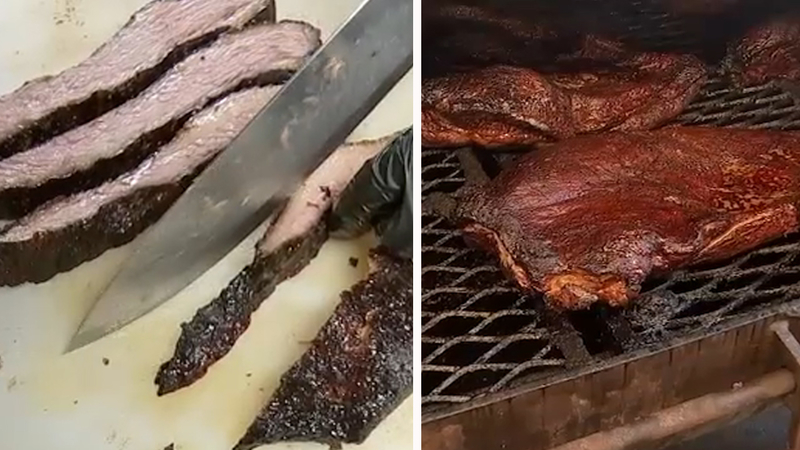 BBQ BATTLE: Whose is better, Houston or Kansas City?

KANSAS CITY, Missouri (KTRK) -- Houston and Kansas City do more than battle on the football field, each city also believes it has the better barbecue.

The food is so big in each area, the Houston and Kansas City mayors made a barbecue bet ahead of the Texans and Chiefs playoff game.

The two cities might be known for the food, but each is different.

When you've been cooking barbecue in Texas for decades, you must be doing something right. At Schulze's Bar-B-Que and Catering in Rosenberg, customers don't leave hungry.

"We've been in business for over 50 years," Schulze's co-owner, Clifford Schulze said. " We just take a lot of pride in our cooking, plus, having good help."

Schulze said the key to successful barbecue isn't just in the seasoning or sauce. Instead, in Texas, it's all about the cook time, and cut of meat.

"I think we take more pride in ours and what we do," Schulze explained. Texas isn't the only place you can get barbecue, Kansas City also prides itself on the dish.

Neither 4-year-old Bear nor Toro could speak, but their eyes said it all.

But with the Texans and Chiefs meeting in the playoffs, barbecue has become personal.

"Texas barbecue is better! That's why the Texans are going to win," Schulze said. " They're used to eating good barbecue."

The big difference between the two regions, Worgul said, is the variety of food.

BETTER BBQ? The Texans and Chiefs game isn’t the only battle on Sunday. BBQ cookers in each region have pride on the line. I went to Schulze’s BBQ to learn about Texas & @joeskc to learn about K.C. Which do you think is better? More on @abc13houston at 8am https://t.co/4oQ9ZejuXc pic.twitter.com/m0ObZkCZkI

"Texas is known for its bigness, right? But Texas barbecue is actually a little bit smaller than Kansas City barbecue because we got a bigger menu," Worgul explained.

Like Texas, you can find brisket, sausage and ribs in Kansas City barbecue, but they also put an emphasis on chicken, turkey, and pork. They also prepare something called burnt ends, which is the fatty part of brisket.

"Juicy on the middle," Worgul explained. "Crusty on the outside. Smokey, very intense. It's a great bit of meat candy in your mouth."

While K.C. joints might think they have the better barbecue, Texas has been at it longer.

After 50 years, Shulze's isn't slowing down anytime soon. He's hoping the Texans show the Chiefs that everything is better in Texas.

RELATED: Two mascots headed to the playoffs have history beyond the field
EMBED More News Videos

The Texans and Chiefs might be enemies during Sunday's playoff game, but the teams mascots' have a relationship that means more than a single game.