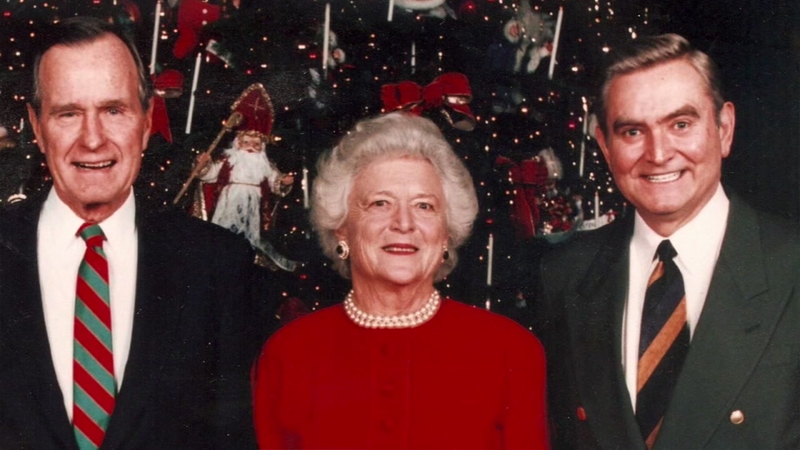 HOUSTON, Texas (KTRK) -- In his 56 years as a journalist in Houston, ABC13 Anchor Emeritus Dave Ward has had the chance to interview and get to know some of the nation's most famous and beloved people.

Tops among them: George H.W. and Barbara Bush.

"I was surprised and shocked at her passing," the Houston legend reflected. "So soon after that story came out. And we've lost a wonderful first lady, I will tell you that. But America is so fortunate that George H.W. Bush and Barbara Bush lived and contributed what they did. And our city of Houston is extremely fortunate that they made their home here."

Dave met George Herbert Walker Bush in 1964 and the first lady several years later. Years ago, Dave was seated next to her at a charity event.

"She looked over at me and she said, 'The city of Houston is very fortunate to have your contributions to our city and to the community,'" he recalled. "She was very complimentary to me and blew me away...I just remarked to her, 'Thank you so much. I wish my mother was here to hear what you said.' And she said, 'well where does she live at?' I told her my mother at the time was living in Jacksonville, Texas. She wanted her address. I gave her my mother and father's address in Jacksonville and I thought, 'well, she's a very busy lady. About a week, 10 days later, I get a call from my mother. She got a personal note from first lady Barbara Bush."

Extraordinary graciousness. But she was also like so many of us when it came to her beloved husband, who loved to parachute to celebrate his birthday.

Dave interviewed her two years ago and joked about whether she'd follow suit.

"I asked her, 'Mrs. Bush, your 90th birthday is coming up. Are you going to parachute out of a plane?' And she looked at me. She said, 'Not only no, but hell no!'' Dave hilariously recalled. "She was after her husband all the time about his parachute jumping. A nagging wife, just like the rest of us."

Dave adds we shouldn't forget that Barbara Bush also had a great sense of humor, though, he says she never told him any dirty jokes.

While she liked talking about her children, the one topic he says they didn't discuss was politics.