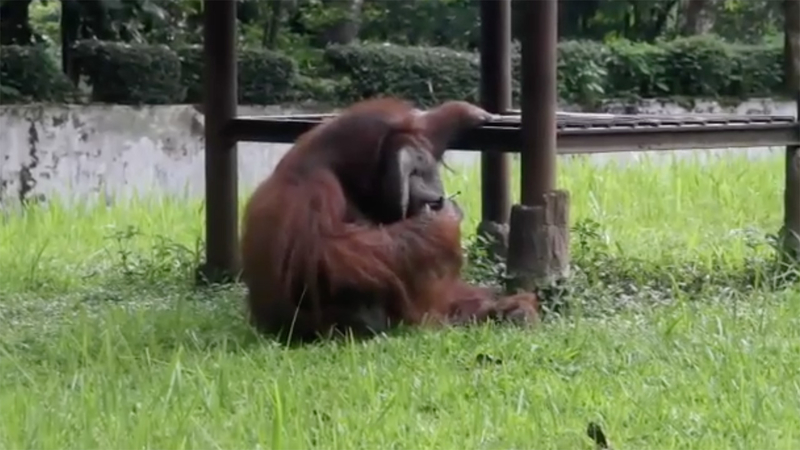 BANDUNG, Indonesia -- Conservationists are demanding action after an orangutan was caught on camera smoking a cigarette thrown into its habitat at an Indonesian zoo, the latest in a string of controversial incidents at the facility.

In the video, shot by Marison Guciano at Bandung Zoo, a visitor is seen throwing a lit cigarette into the animal's enclosure. The orangutan makes its way over to the cigarette, picks it up and puts it into its mouth. After backing away from the visitors, the orangutan sits down and continues taking drags off of the still-lit cigarette, ashing it multiple times before the video ends.

Throughout the clip, onlookers can be heard laughing in the background.

"Visitors do not know how to deal with animals, but the lack of supervision by zoo management is equally lacking and is one of the issues which must be addressed," Guciano wrote on Facebook. "Indonesia desparately [sic] needs animal welfare standards in its zoos."

"We very much regret that such a thing happened," Bandung Zoo spokesman Sulhan Syafi'I told the Associated Press, adding that the incident had been reported to local authorities.

The smoking gorilla incident isn't the first time that Bandung Zoo has drawn the ire of animal welfare activists. A Change.org petition demanding the zoo's immediate closure has nearly one million signatures.

That petition alleges that the zoo allowed sun bears to starve to the point where they had to eat their own feces, that an elephant died chained to the ground and that a dead giraffe was found to have 40 pounds of garbage in its stomach. The claims appear to be corroborated by media reports.

Indonesian zoos have long been under fire for their treatment of animals. According to a 2015 report by local newspaper The Jakarta Globe, the country's Ministry of Environment and Forestry said that 54 of its 58 registered zoos were either "deemed improper...or are not yet officially accredited" by the Indonesian government.