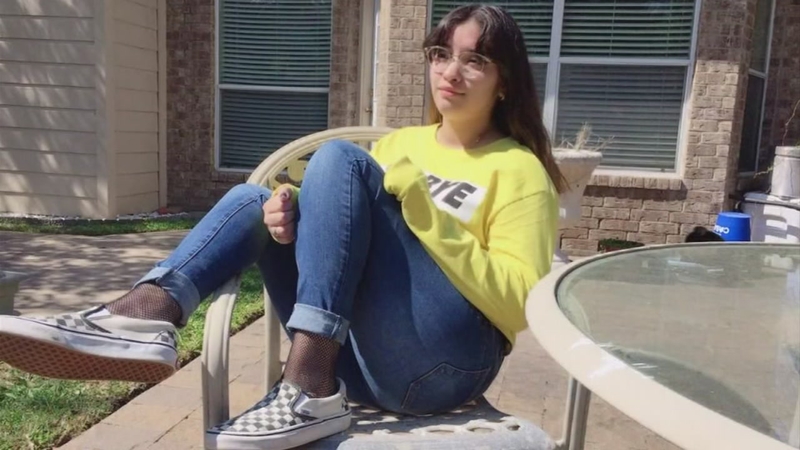 HOUSTON, Texas (KTRK) -- The Baez family was headed to the movies on Sunday when the unimaginable happened.

"We were on the way and we just stopped at that light," said Nicole Baez.

The incident occurred at Westpark and Dunvale, as Nicole Baez was in the backseat with her 17-year-old sister, Britney Baez.

A Houston family is in mourning after a teen was killed and her father was injured in a violent crash while going to the movies.

"I just remember sitting down on the sidewalk, my mom was still screaming my sister's name. I can hear my dad asking for water. I could sort of see people around me, that's when my arm started killing me," said Nicole.

Police say the car driven by Edy Lopez-Hernandez crashed into them.

Nicole's arm was fractured. Her father was critically injured and is still in the ICU. Her 17-year-old sister Britney Baez was killed.

"She was the level-headed one that knew how to keep everybody calm and she was the voice of reasoning," said Nancy Gomez, Britney's cousin.

"I can never replace her with anyone else and I'm not going to. I will always remember her," said Nicole Baez.

Investigators say he was on drugs when he crashed into the Baez's car.

A law enforcement source says he was going 70 miles per hour and didn't use his brakes.

After the crash, police say he grabbed his two-year-old out of the car and ran down the street before someone stopped him.

Britney's family hopes this is a lesson to others, to think twice before getting behind the wheel while under the influence.

"Now he's not only damaged our family, we're experiencing this loss but I'm sure he's affected his family as well," said Gomez.

They have set up a GoFundMe to pay for medical and funeral expenses.

Now they're trying to cope with the loss of a young woman who always made them smile.