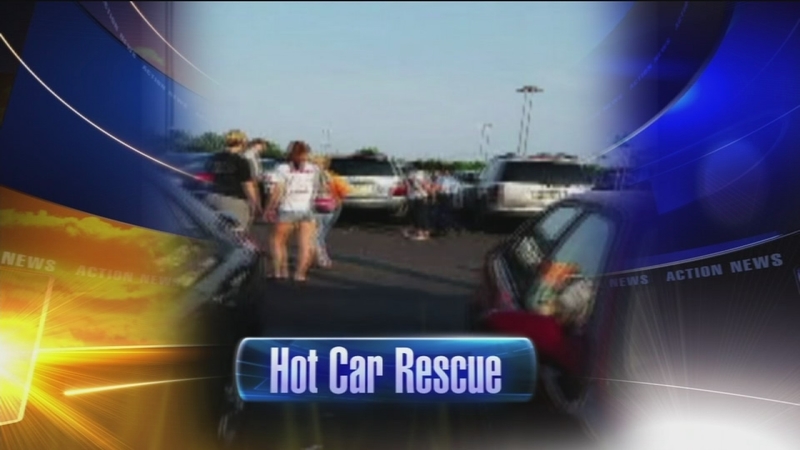 PHILADELPHIA, PA -- Police say a 6-week-old baby was left unattended inside a SUV in the parking lot of a Northeast Philadelphia Walmart store.

An Action News viewer noticed the crowd and all the commotion around 6:30 p.m. Monday and quickly hit the record button on her cell phone.

"When we pulled into the lot, we saw people standing around the car and some Walmart employees looking around," the viewer told Action News Tuesday night.

It would soon become apparent to her that a 6-week-old baby boy had been left in a silver 2005 Toyota Highlander outside the Walmart on Franklin Mills Boulevard.

As they awaited for help to arrive, the viewer and others became anxious for the infant's well-being.

"It was hot yesterday, not as hot as it has been past days, but hot inside of a vehicle. And I was really annoyed and aggravated, because why would you leave the baby in the car?" the viewer said.

Fortunately, a police officer arrived a few minutes later, at about the same time the child's 35-year-old mother emerged from the Walmart.

The mother was promptly handcuffed and taken into custody.

"From there they were trying to get her to say where the keys were so they could get the baby out of the car," the viewer said.

The officer finally got the keys to the SUV as firefighters and paramedics arrived on the scene.

A short time later, they took the baby out of the car.

The baby was taken to St. Christopher's Hospital for Children for treatment.

The child is said to be OK and has been placed in the custody of his father.

It remains unclear how long the child had been left alone in the vehicle.

The fate of the mother is still undecided as investigators continue to go over what she will be charged with.