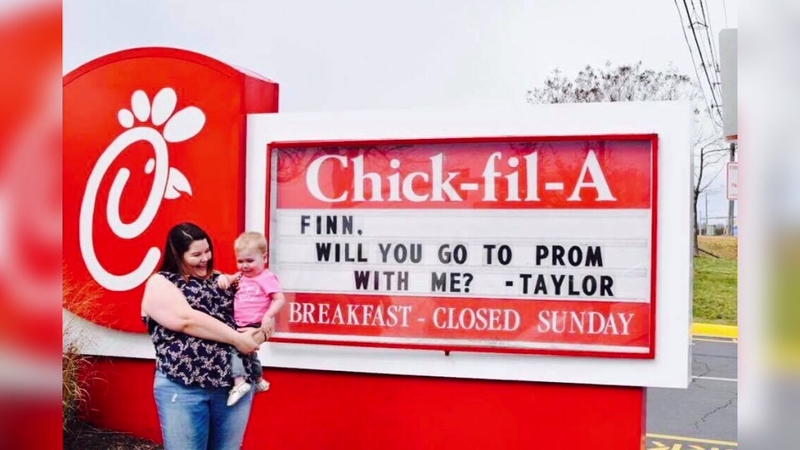 FREDERICKSBURG, Va. (KTRK) -- Although promposals rely increasingly on grand gestures and decadence, one Virginia high school student's act of kindness shows that a promposal from the heart is still the most touching.

When Kelly Blumenthal and her 2-year-old son Finn arrived at a suburban Virginia Chick-fil-A restaurant last week, they found a special message on the restaurant's marquee: "Finn, will you go to prom with me? -Taylor."

The message was placed by 17-year-old Taylor Schafer, a senior at Caroline High School who wanted Finn -- who was born with a congenital heart defect -- to be her guest of honor for the night.

Kelly and Finn were introduced to Schafer through another "heart family" of a child who has undergone heart surgery, as Kelly calls them. They met in person at an event where Schafer had volunteered her time as a photographer for heart families.

"Taylor has followed Finn and some other heart families for a long time. She has a special place in her heart for these children who go through so much struggle. For her, I know it's really special to give an opportunity that some of these kids like Finn may never see," Kelly said.

Schafer's choice of location was also meaningful to the Blumenthal family.

"It's a really special spot in our community because that restaurant is running a fundraiser in Finn's name for proceeds of some of their items to go to the American Heart Association," Kelly said.

Finn accepted Taylor's heartfelt promposal and, while Kelly admitted that he is too young to grasp the concept of prom, she said he loves to dance and will no doubt enjoy himself.

"A lot of people may think it's silly. He's 2, and it's her senior prom, but we both have a special connection," Kelly said. "It's an honor and a blessing. I will never find words to be able to thank her."

Even though the big day is still a few months away, Finn and Schafer already have their outfits picked out. Finn will wear a black tuxedo to match Schafer's gold and black dress, although he will ditch traditional dress shoes in favor of dance-friendly moccasins.

Due to his health, Finn was in and out of the hospital and facing an uncertain future for the first year of his life. His fighting spirit attracted the attention of tens of thousands of followers on the Prayers for Finn Facebook page, where his parents documented his battle and shared their wisdom for making it through tough times.

Kelly told ABC13 that the people she has met along the way -- her Facebook followers, other families with children battling heart conditions and those like Taylor who support them -- have helped her keep a positive attitude throughout Finn's journey.

"You need to surround yourself with people that are going to be your biggest cheerleaders. Other families that are walking this walk with us, other hear families, have been a huge asset to our family getting through this," she said.
Related topics:
societyvirginiawhat's trendingbuzzworthyact of kindnesstoddlerbe inspiredu.s. & worldgood newspromheart diseaseheart defects
Copyright © 2022 KTRK-TV. All Rights Reserved.
U.S. & WORLD
Notorious gangster reflects 30 years after becoming FBI informant
Chiefs fans donate $178K to NY children's hospital after beating Bills
Statue honors Kobe Bryant, daughter Gianna at helicopter crash site
Spotify says it will grant Neil Young's request to remove music
TOP STORIES
Deputies escort body of fallen HCSO Sgt. to funeral home
Alleged K9 stabbing suspect charged with father's murder
No bond granted for suspect in Pct. 5 corporal ambush killing
Cool temps through the weekend with a warm-up next week
Bodies found in back seat and trunk of burning vehicle in Liberty Co.
Attorney of man questioned in dad's death wants him to seek help
Houston greenlights plan to help homeless find housing
Show More
EPA announces cleanup plans to address Fifth Ward cancer cluster
Investigation underway in pregnant woman shooting
Search underway for suspect in Texas City double shooting
You could get paid to get your COVID vaccine or booster
2 Aldine ISD students lose $1K for college when FFA turkeys killed
More TOP STORIES News