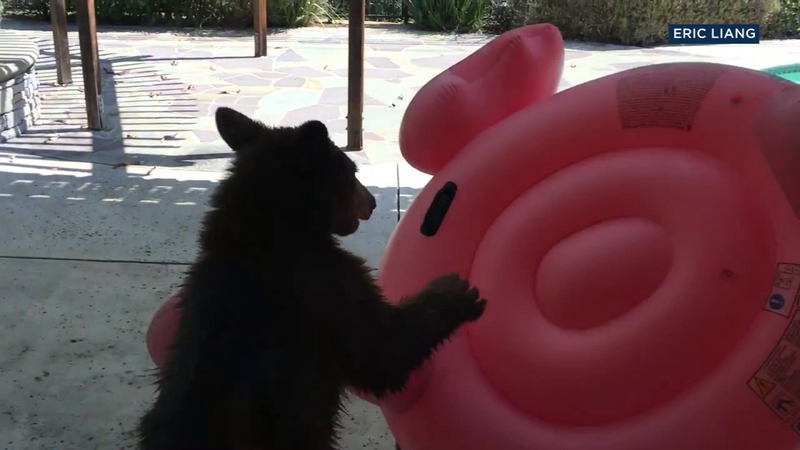 The Liang family said the baby bear and sometimes his mama have been occasional visitors to their home in the past year.

A baby bear found a new playmate in an Arcadia family's backyard - an inflatable pink flamingo.

In April, the baby and mama took a dip in their backyard pool. The Liang family also caught that visit on video, with the cub tinier back then.

They returned again in June.

During this most recent visit on Saturday, Liang family members watched safely from behind a glass door as the baby and mama returned for a new visit to the backyard.

This time, the little one discovered a new friend: a giant inflatable pink flamingo pool toy.
"Well I've never seen a baby bear wrestle a flamingo. I was kind of surprised to see it do that," Riley Liang, 8, said.

The family's video shows the adorable baby bear jumping on it a few times, wrestling around and biting the head, as the toy managed to stay inflated.

"When the bear was wrestling it I tried to say, 'Bang on the window to get those bears away!' But then my dad said, 'Ah, no. I think it's too late,'" Kylie Liang, 6, said.

Eric Liang said the family had never seen anything like that and his children were having fun watching the cub. He said the mother bear appeared "exasperated" similar to how a parent would feel with their child in a toy store.

"Just saying, 'C'mon let's go.' It was just the most adorable thing you've ever seen," he said.

He dragged it around further into the backyard and keep chewing at it and wrestling with it before eventually wandering off again.