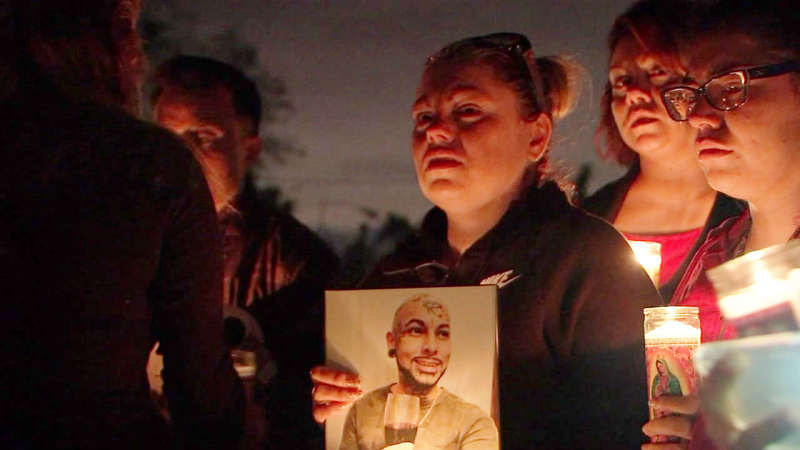 Family pleas for driver in deadly accident to turn himself in

HARRIS COUNTY, TX (KTRK) -- It's a tragedy all too common on Houston area roadways: people losing their lives while simply walking on the street.

Auto pedestrian accidents are a sad reality in a city as large as ours, with at least four deadly cases happening just this month alone.

Last night, a woman in a northwest Harris County suburb was severely injured when she was hit by a car.

Crews rushed to victim's aide on Daryns Landing Drive around 6:16pm, but she died on the way to the hospital.

The victim, described as a woman in her mid-50s, has not been named.

Investigators say Chavez was killed around 9:40pm Tuesday while walking down Furay.

Two churchgoers saw the man, who was wearing all black, as he walked alongside the street. Moments later, an alleged speeding car slammed into Chavez, killing him at the scene.

Chavez's family is pleading for the public's help in finding the person who did this, cutting his life short just before Christmas.

The heartache that his family is feeling is sadly felt by dozens of families in the Houston area each year.

The CDC says there is one crash-related pedestrian death every two hours in America today.

Early data suggests that in 2015, pedestrian deaths surged 10 percent in the U.S., according to the Governors Highway Safety Association.

Traffic is blocked off after someone was hit and killed on Old Galveston Road.

The reasons for the uptick aren't clear.

In Chavez's case, investigators say a lack of sidewalks may have contributed to his death.

Last Friday, a woman was killed and a man was severely injured while trying to cross six lanes of traffic on Highway 249 at Fallbrook.

The 45-year-old Hispanic woman who died was hit by two different vehicles as she and an 18-year-old male victim were in the middle of the dark highway.

Man survives being hit by truck in northwest Harris County.

It appears a similar incident happened while a pedestrian was trying to cross Old Galveston Road at El Dorado back on Dec. 7.

Another frightening case involving an auto pedestrian accident unfolded in front of someone's dashboard camera in the days following Thanksgiving.

The camera was rolling as a pickup truck struck a man at Highway 6 and Smithstone around 8:40am on Nov. 29.

Witnesses said the truck came within a few feet of running over his head.

The victim was flown by air ambulance to Ben Taub Hospital with a big cut on his head, over his eye and possible broken bones, according to eyewitness Saad Khan.

A tow truck driver said the victim awoke on the ground, but was unable to talk.

The video serves as a reminder of just how dangerous it can be to take to the streets of Houston.

How to keep safe when walking
If you walk regularly, the CDC makes these recommendations to keep yourself safe, especially when traveling by foot at night: