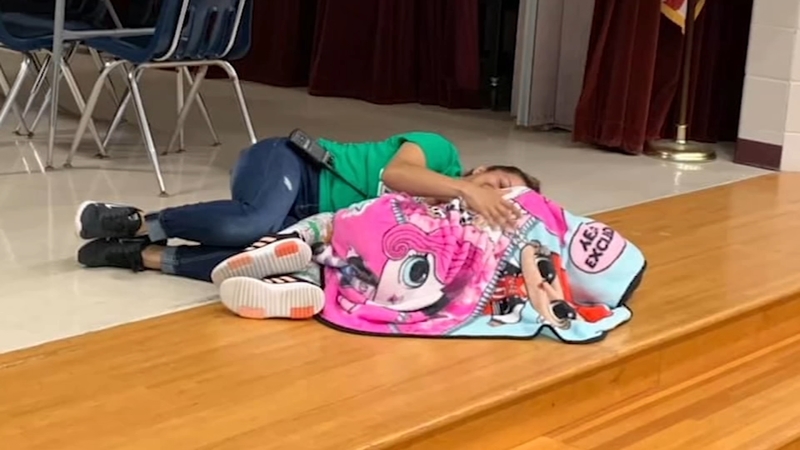 Custodian comforts girl with autism who had rough morning

ALVIN, Texas (KTRK) -- A photograph of a Melba Passmore Elementary School student being comforted by a staff member is gaining a lot of attention on social media because of the powerful display of kindness.

Hollie Bellew-Shaw says her daughter Kenlee has autism and the noise of the cafeteria was bothering her, causing her to have a rough morning.

She says Kenlee laid on the school's stage and covered her head with a blanket to shield herself from the noise.

Soon enough, Kenlee's favorite custodian, Mrs. Esther, was there to comfort her.

Hollie said Mrs. Esther got on the floor with Kenlee and held her.

"Kenlee adores Mrs. Esther," Hollie shared. "She always greets my daughter with kind words and a hug, which is so special to her."

Hollie told ABC13 her daughter has had a special bond with Mrs. Esther for about three years and that she holds a special place in both of their hearts.

She said anytime Kenlee sees the custodian, she runs up to her and gives her a big hug.

"This goes to show you that a kind word, a hug, and a little compassion are all it takes to make a huge difference in a child's life," Alvin ISD said of the sweet moment in a Facebook post.