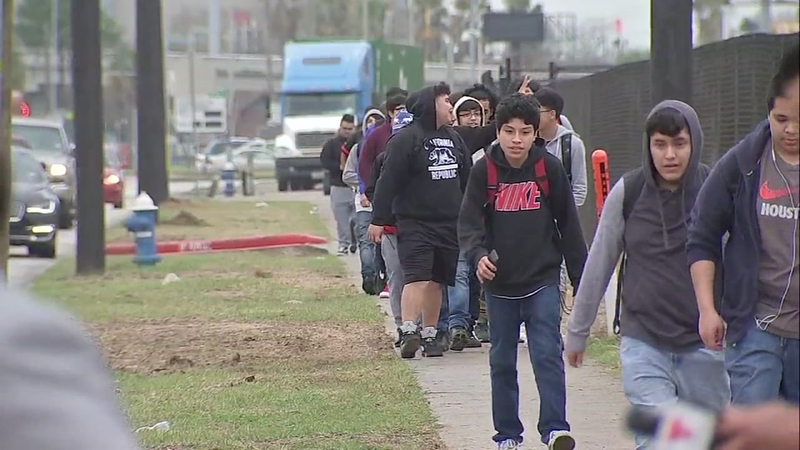 Students at Stephen F. Austin HS walk out in protest

HOUSTON, Texas -- Hundreds of students have walked out of Houston's Austin High School as a protest, rallying behind a student who's under an immigration detainer.

Austin HS students walkout to protest detention of a student

On January 30, a fight between groups of students near the campus resulted in the arrest of Dennis Rivera-Sarmiento, according to HISD officials. He has been charged with assault bodily injury.

According to documents, Rivera-Sarmiento hit a female in the head with his fist.

The teen had an ICE detainer placed on him due to his status, HISD said.

During the walkout, students marched, chanted and carried signs in support of the teen.

Houston ISD responded to Wednesday's walkout in a statement, denying that it assisted in Rivera-Sarmiento's ICE detainment:

In line with the commitment expressed by both the Board of Education and the Superintendent, HISD has not used district resources to assist in deportation actions and we do not report students to ICE. Our Superintendent and administration remain steadfast in the district's commitment to educating every student regardless of their immigration status. Students are and will continue to be safe in our classrooms.
Report a correction or typo
Related topics:
houstonhouston isdproteststudents
TOP STORIES
Bodycam footage of fatal HPD involved shooting released
Man airlifted to hospital after possible road rage
Sunny but cool today, big rain maker early next week
Anti-mask parent threatens to bring guns to school: 'Loaded and ready'
NCAA criticized for changing policy on transgender athletes
Booster shots needed against omicron, CDC studies show
COVID testing company sued over alleged scheme
Show More
Man charged with son's murder says he shot in self-defense
What to know about tensions between Russia, Ukraine
How a 73-year-old grandmother outwitted a scam artist
Mother facing eviction as she waits for child care assistance
Regina King's son, musician Ian Alexander Jr., dead at 26
More TOP STORIES News