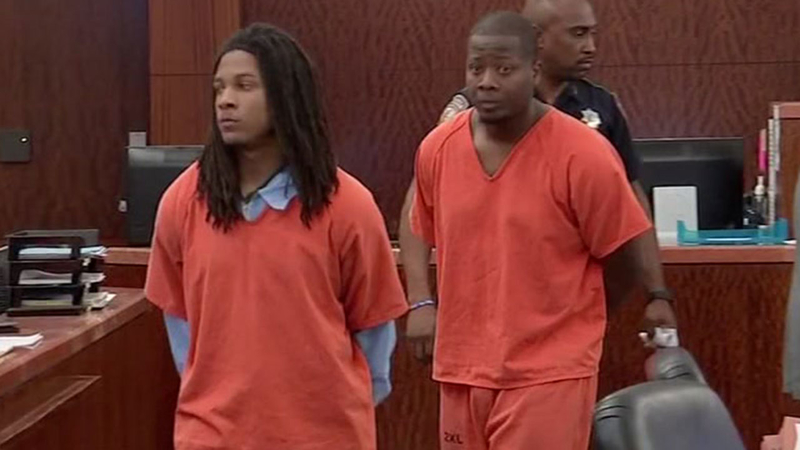 HOUSTON (KTRK) -- There is a strange twist in a case that started out as an attempted robbery.

The three men who tried to rob an Atascocita homeowner are now charged with murder. But none of them pulled the trigger when David Smith was shot.

Earl DeBlanc, 35; Lionel Biggs, 29; Edgar Hayes, 20, didn't say anything as they went before a judge Tuesday morning. The prosecutor argued they are the reason Smith was killed. Harris County officials say someone in the home the three were robbing opened fire on the suspects, killing Smith.

"It's not necessarily a common situation but it occurred; because in the course of a robbery a death occurred -- that their friend was killed in them engaging in this aggravated robbery," said Lisa Calligan, the prosecutor on this case.

The attempted robbery happened in the 18900 block of Kemble Road in Atascocita around 2am this past Saturday.

Anquette Hayes, Edgar's mother, couldn't take seeing her son in an orange jumpsuit as he walked into court.

Hayes is not only struggling with her son in jail, she's also grieving for Smith. He was her nephew.

"I'm sorry about my nephew, David Smith. I love him and I miss him but this is not for my son. He's a good son. He was at the wrong place at the wrong time," Hayes said through tears.

Related topics:
atascocitamurderharris county sheriffs office
Copyright © 2021 KTRK-TV. All Rights Reserved.
TOP STORIES
Arrest made in case of Alvin abduction, sexual assault of a minor
20-year-old shot to death during break-in of Conroe home, police say
Man accused of dismembering mom's body after murder appears in court
Houston Astros on pace for record beer year
Astros Game 6 guide: Closures around Minute Maid Park back on tonight
The University of St. Thomas offers low-cost counseling services
JJ Watt on Texans: 'It hurts me to see where' fan base is now
Show More
More truck drivers needed to assist with US' supply chain shortage
Don't get stuck in these traffic closures this weekend
Warrant: Baldwin didn't know weapon contained live round
Prop guns: What they are and how they can kill
4 teens accused of luring victim to his death in SE Houston
More TOP STORIES News