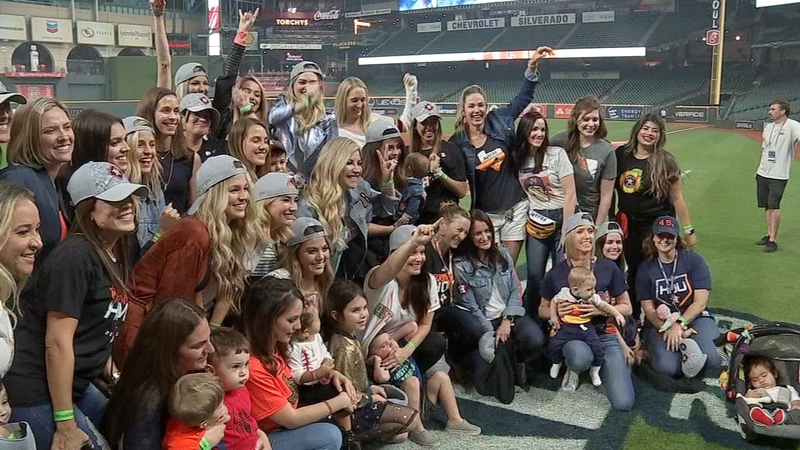 HOUSTON, Texas (KTRK) -- The Houston Astros' ALDS win Thursday night over the Tampa Bay Rays was special for the team as they move on to the next round, but we can't forget about their families, who were also on the field celebrating.

Check it. #Astros enjoying their fam as they celebrate the upcoming ALCS pic.twitter.com/5vJtllzHe2

Jose Altuve's daughter, Melanie, ran to her daddy's arms. Altuve was among the players who had a great Game 5.
Pitcher Gerrit Cole, who was cool on the mound, obviously had a lot to smile about as his strong performance helped the team lock up the series.

Josh James was also on the field with his family, including baby son Noah, who was born last November.

Welcome to the world Noah pic.twitter.com/I7LXZScxR0

Carlos Correa and his fiancée, Daniella Rodriguez, were on the field along with just about everyone from the Astros organization.

You'll remember Correa proposed to Rodriguez, who is a former Miss Texas USA, after the team won the World Series in 2017.
EMBED More News Videos

Team owner Jim Crane says they're all one big family.

"Family is what it is about, the team is a family and the family is the family, and we love seeing them out here and the kids running around and it can't be any more fun than that," Crane said.

Though the Astros are inching closer to returning to the World Series, there is still work to do.

They'll have just a day of rest before they take on the New York Yankees in Game 1 of the American League Championship Series here in Houston.