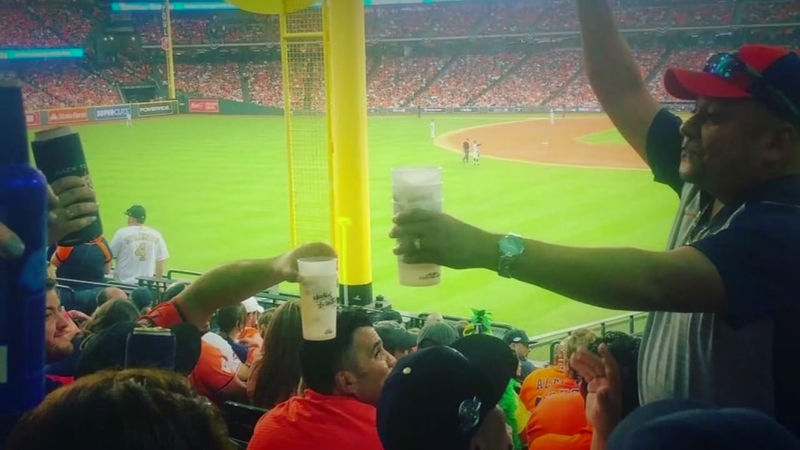 HOUSTON, Texas (KTRK) -- Section 103 at Minute Maid Park had a reason to cheer after the Astros hit back-to-back home runs during Game 1 of the American League Division Series.

In the fifth inning, Eddie Flores told fans in the rows near him if Astros' outfielder George Springer hit a home run, he would buy everyone beer.

When it happened, Flores kept his promise.

LIFE OF THE PARTY: This Astros fan said he'd buy beers for his entire section if George Springer led off the fifth inning with a home run. And then it happened!

"We bought beer for seven rows straight," Flores said. "Then, it was back-to-back, so I bought another seven rows worth of beer."

Jose Altuve hit the second home run, which meant Flores bought another round of beer to celebrate. The cost?

Charles Adams received one of those free beers.

"I mean, I was more excited about the home run, but the beer added a little," Adams recalled. "I mean, our section went bananas."

Adams took Flores' photo and shared the story to social media, and it quickly went viral.

"I think if someone does that, something so awesome, so great, so Houston, he needed to get credit so I wanted to put it out there on Twitter and Instagram," Adams said.

Flores said he'll be back for Game 2 on Saturday afternoon.

He's hoping he's out another $500, because it could mean the Astros might find themselves with a commanding 2-0 series lead.