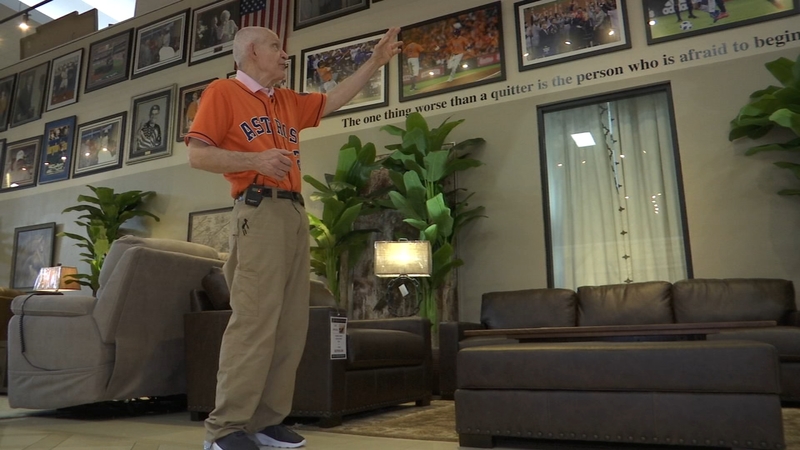 HOUSTON, Texas (KTRK) -- As the Houston Astros continue their playoff run, one of the team's biggest supporters, Mattress Mack, hopes to add more championship memorabilia to his massive sports collection.

Jim McIngvale, known as Gallery Furniture's "Mattress Mack," is a huge Houston sports fan. His customers see his one-of-a-kind memorabilia while shopping around his iconic store on I-45.

MATTRESS MACK MEMORABILIA: If you've been to @GFToday on I-45, you've seen the sports memorabilia. @MattressMack gave me a tour, and showed me his favorite pieces. See those, and learn where his passion for Houston sports comes from on @abc13houston at 5pm. #Astros #TakeItBack pic.twitter.com/X8kuyONNUp

"The customers aren't in my house very often," McIngvale explained. "This is my house. I spend most of my time here."

There are dozens of photos, autographed goods, and even sneakers once worn by some of sports' biggest stars.

The walls feature photos of Houston sports icons both past and present. While all teams are featured, the Astros are close to McIngvale's heart.

"Sports is very unifying for all of us," he explained. "We forget about politics, and think about the good of bringing people together, and that's certainly what the Astros have done."

As the Astros continue their pursuit to winning another title, Mattress Mack is right there with them.

He's a team sponsor, attends games, and is currently offering customers the chance to get a free mattress if the team wins it all.

His passion for Houston sports, he said, comes from his time with Club Westside, a golf club that McIngvale and his wife, Linda, have been involved with for decades.

In fact, out of all his sports memorabilia, his special pieces are from his time with the club.

"My favorite piece would have to be this tennis Masters cup, because we put so much into it and we brought the best tennis players in the world to Houston for two consecutive years," McIngvale explained.

Mattress Mack has no plans on slowing down on adding to his collection. He intends to be tied to the Astros and other Houston sports teams. While he enjoys allowing customers to see the goods, and share the memories, McIngvale said he wants his legacy to be larger than any photo you'll find on his store's walls.