Who is Joe West? The veteran MLB umpire who called fan interference ruling in Astros game 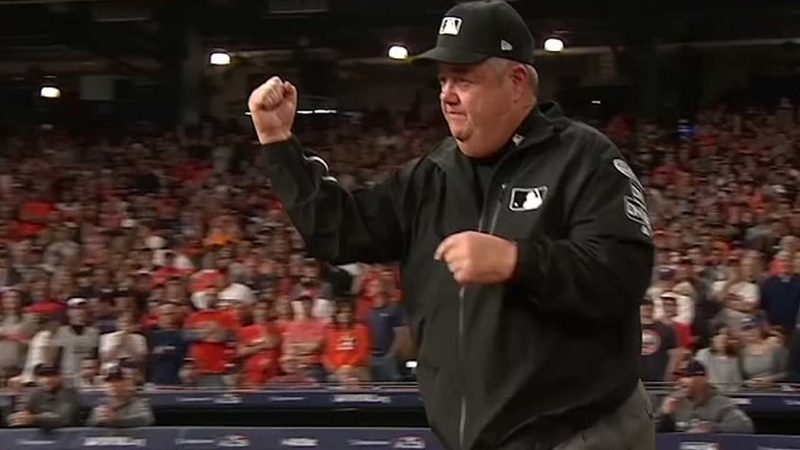 Who is Joe West?

HOUSTON, Texas (KTRK) -- MLB umpire Joe West has 40 years of experience in the big leagues and recently celebrated working his 5,164th career game, hitting the milestone back in August.

But it's likely some fans weren't looking for that when they searched his name on Google and made him a trending topic Wednesday night on Twitter following game 4 of the AL Championship Series between the Houston Astros and the Boston Red Sox.

West is the ALCS crew chief.

He called fan interference on what many think should have been a two-run home run for the Astros' Jose Altuve.

Astros manager A.J. Hinch had the call reviewed, and replay officials in New York upheld West's ruling, confirming Altuve was out. The league said there wasn't evidence for the officials to overturn the decision.

Being the pool reporter for Joe West seems like a ball of fun: pic.twitter.com/4zWMNss8cZ

Whether you agree with it or not, the ruling has catapulted West, at least for the moment, as one of the key figures in the conversation.

As evidenced by his decades-long career, West has been at this a while. He has called 123 postseason games and worked 34 World Series games, which is more than any active Major League umpire, according to the MLB.

His career has also spanned six of the 10 commissioners in the history of baseball, the league says.

Even though the 65-year-old from North Carolina brings a lot of knowledge to the position, his career has also included some scuffles and plenty of ejections.

Four years ago, he was suspended one game for making contact with a Phillies reliever during an argument.


In another instance last month, his umpiring ability was questioned by a Diamondbacks broadcaster.

No matter how professionals in the sport to casual spectators or diehard fans feel about him, he anticipates sticking around to become the umpire who has worked the most games.

Right now, he is second behind Hall of Famer Bill Klem, who has a record high of 5,375.

We'll see if he'll add another game to remember Thursday night when the Astros fight to stay alive in the series in game 5.

An interesting side note: West can also list singer-songwriter on his resume, having produced a couple of country albums over the years.