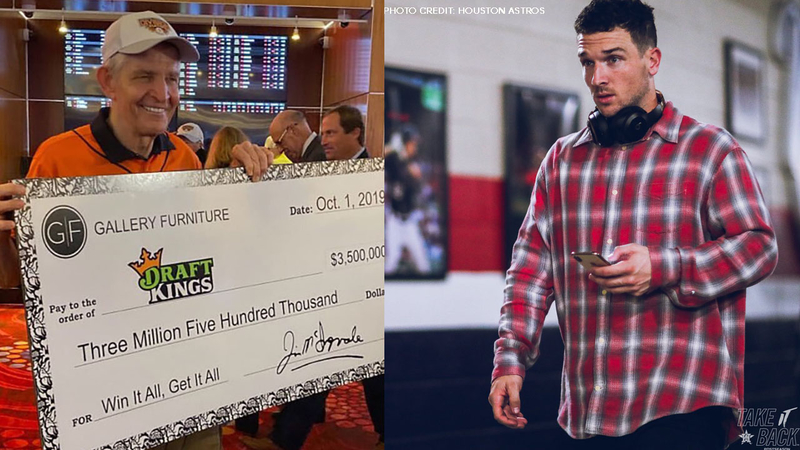 Astros costumes that will make you life of the party

HOUSTON, Texas (KTRK) -- The Astros may have dropped Game 6 of the World Series Tuesday night, but that doesn't mean you can't rock a Halloween costume inspired by the team.

Here are a few easy, one-of-a-kind costumes inspired by some of the most memorable moments this season.

The third baseman has been seen rocking a red plaid flannel shirt ahead of Games 3, 4, and 5 of the World Series, leading fans to believe it's his lucky shirt. As the MLB's Cut 4 pointed out, they won each of those games.

If anyone asks, you can tell people you're dressed as the youngest player to ever hit three home runs in a single World Series.

All you need is a pair of overalls and your favorite Astros hat.

Mattress Mack placed one of the largest bets ever taken by a U.S. bookmaker when he bet $3.5 million on the Astros to win the World Series. This is a perfect costume to incorporate props.

A.J. Hinch after World Series win and his jorts

Inspired by a bet on the Astros winning the World Series, Hinch promised to wear jorts if the team is victorious.

BREAKING: @AJHinch, per his own declaration, will wear jean shorts if the @Astros win the World Series.

Though it's unclear what Hinch will be paring the jean shorts with, you can rock it with your favorite Astros shirt or jersey.

This man is a hero. Twitter please figure out who this guy is so we can reward him. #WorldSeries pic.twitter.com/suMtVECfXY

Remember the man who chose to save his two beers rather than to catch a home run ball, which ended up hitting him in the stomach? You can sport his look!

The ball went flying out into the stands where it hit the Nationals fan, who had his hands full with the two cans of Bud Light.

He may root for the opposing team, but according to the beer company, he's a total hero.

He's every 'Stros fan's favorite green man. This costume may take an extra bit of work, but when a fan used her creativity to mimic the Astros' mascot's look last year, he was all about it, according to his Twitter page.

It’s like looking in a mirror, only not. https://t.co/td0ZUcC9Jm

Carlos Correa and his fiancée, a former Miss Texas

Shortstop Carlos Correa and his fiancée Daniella Rodriguez are no stranger to sharing pictures on social media, so there are plenty of looks to gain inspiration.

If you're looking for a costume that will certainly spark a conversation, and one you can pull off with your gal pals, this one's for you.

Three women who sat behind home plate during Game 5 of the World Series gained widespread attention after they flashed pitcher Gerrit Cole.

All you have to do is grab a cropped yellow T-shirt and pair it with dark jeans, but maybe avoid the flashing part.

RELATED: The NFL tribute to Altuve and Judge's height difference