Arson suspected after firefighters respond to 2 N. Houston fires within half mile of each other 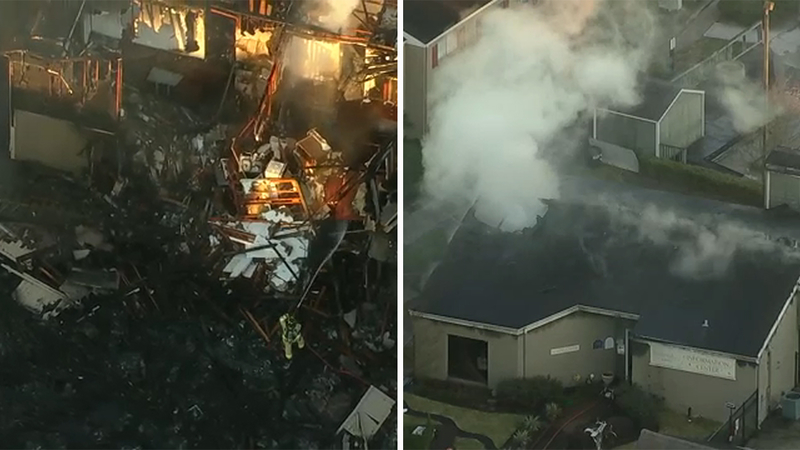 Arson suspected after 2 nearby apartment fires in N. Houston

HOUSTON, Texas (KTRK) -- Firefighters in north Houston had a busy morning after two fires appeared to be intentionally started by an arsonist.

They were dealing with a fire at an abandoned building in the 800 block of Seminar Drive when a second fire broke out down the street at the Breckenridge At Cityview apartments, located in the 500 block of the same street.

At the apartment complex, no units caught on fire and no injuries were reported, Houston fire officials said. However, the leasing office was badly damaged.

Video from the scene shows the outside of the leasing office charred.

The fire chief at the scene told ABC13 the fire started next to the leasing office, near a Coke machine.

Several witnesses said a kid was the one who started the fire, which quickly spread to the office and left a huge hole in the roof, along with some other damage.

SkyEye video shows smoke billowing out of the roof as firefighters blasted the building with water.

Firefighters said there are security cameras on the property, but the fire damaged the system. Footage is being pulled from an offsite server that will hopefully show exactly what happened.

Officials said no one had been taken into custody.

Several hours earlier, just down the street on Seminar, the first fire happened around 12:30 a.m. at an abandoned apartment complex that is fenced off. The fire chief said nobody has lived there since Hurricane Harvey. The overnight fire destroyed the building.

Preliminary information suggests that the abandoned building fire was also caused by arson, but officials did not have any details on a possible suspect in the case.

So, the big question here is: Are these fires connected?

At this point, investigators say it's too early to tell, but they are looking into the possibility.