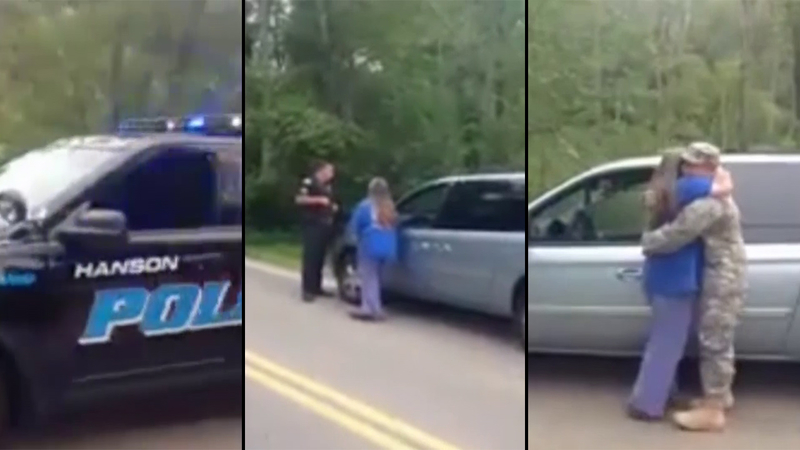 HANSON, Mass. -- Police officers helped a young soldier pull off a surprise reunion with his mother, but first they had a little lighthearted fun.

Darlene MacAllister told ABC affiliate WCBV-TV she was driving when she suddenly saw flashing lights in her rearview mirror. Seconds later, three Hanson police officers were telling her to get out of the car.

"I was scared," MacAllister said. "I know I was speeding a little bit trying to get home."

Two of the officers began asking her a series of questions while a third pulled out a phone and began recording video. While MacAllister was distracted, her son began sneaking up behind her to pull off his surprise homecoming he'd been planning for weeks.

"It definitely caught me off guard," MacAllister said. "I just hung up the phone with him saying he wasn't going to be home because his flight was canceled. The police officer had him call and tell me that."

Her son, Alan MacAllister, is an Army engineer based at Fort Carson, Colorado. He said the look on his mother's face when she saw him was priceless.

"I can't explain it," Alan told WCVB-TV. "It was just one of those looks. Like, you're so happy and so pissed off at the same time. I got her."

Alan's mother said she plans to get her son back with another prank. Until then, the two plan to enjoy some downtime and will celebrate Alan's 19th birthday.