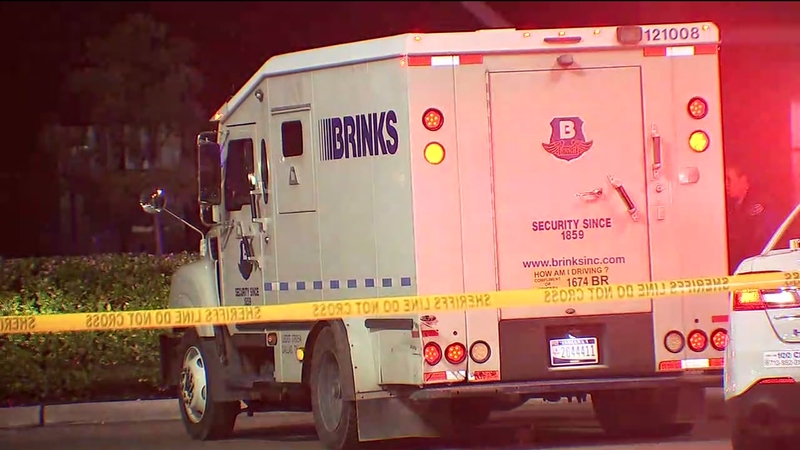 HOUSTON, Texas (KTRK) -- Three or four men in jumpsuits are on the run after they robbed a Brinks armored truck driver on Wallisville Road in northeast Houston.

The Harris County Sheriff's Office is investigating at the Chase Bank near Black Rock Road, not far from Beltway 8.

Deputies said the men robbed the Brinks carrier at gunpoint and then jumped into their getaway car.

That is when investigators said the armored truck driver rammed the vehicle, and the suspects opened fire.

"It's a miracle, and we're just thankful that we don't have something more heinous than that here," Harris County Sheriff's Office Lt. Jeff Stauber said. "It is tragic in the fact that that young woman had that pistol at her, but thank God that no one got hurt."

Investigators said three or four suspects are on the run after an armored car driver was robbed in northeast Houston.

The robbery suspects were able to get about a block away from the scene, but ditched their getaway car.

Neighbors were shocked to find a smashed truck in the road, and deputy cars surrounding it.

"I didn't know what was going on until I came out and there was a bunch of cop cars in front of our house," Gina Flores said. "I had no idea. I thought it was a hit and run."

A driver in a blue Chevrolet Silverado was carjacked, according to investigators, and now those suspects are on the run.

They are only described as being black males in jumpsuits.

The Chevy truck has a Texas license plate JSY1407.

If you see the vehicle, call the Harris County Sheriff's Office.